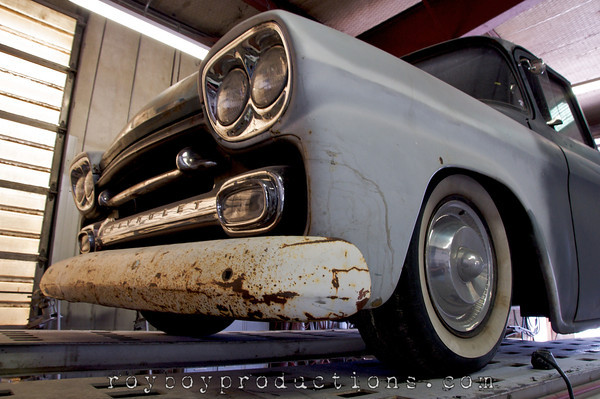 In addition to the 41 Ford that’s undergoing some way kool work, there’s a VW Bug that’s being built for Jeff’s son, and McPhail’s 58 Apache truck that was referenced in the first post. Here’s some shots of the Apache. Outside we assembled some of the koolest cars around, they all just happened to belong to Jeff 🙂 We needed to bring two of them back from the house so Mick (Straykatkustoms on the H.A.M.B.) drove Jeff’s way kool 57 Caddy. Now this car is one of the koolest kustoms ever so you can imagine Mick’s excitement/nervousness over the prospect of driving such a piece of art. God was smiling on him as he pulled the Cad into the Premier lot in one piece.

I’m not sure that Mick wanted to get out of the car though. Right about here I think the conversation was something like, “I can’t believe you let me drive your car!”

So now we have the 57 Caddy, 63 Galaxie, Stude Truck, Hot Rod and the 41 frame all set out front for some shots.

I think this picture is telling you to Stop at Premier Body & Paint (yes I’m a corny bastard I know). The 41 Ford’s frame is representin’ Owning a 63 Galaxie myself I have a soft spot for them, but Jeff’s is just spot on fantastic.