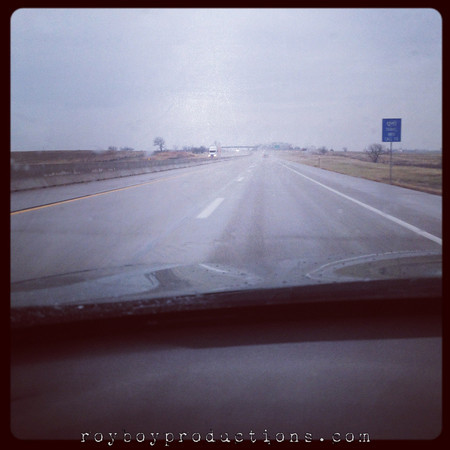 Wow! That’s the basis of my review of my weekend in Austin. Fantastic cars, killer music and most importantly some of the koolest people anywhere made this one of my best weekends all year.

I’ve started using Instagram on my iPhone and this trip I experimented with documenting the trip with that app. So along the way I was snapping shots from my iPhone which was mounted to the dash of my car.

I left home (Central KS) Thursday evening, determined to make it past the dreaded Fort Worth traffic so Friday’s drive would be short and fun.

Finally around 2am I found a hotel on the south side of Ft. Worth and decided to crash out for a few hours.

Friday was a nice short drive of a little over 2 hours.

I rolled into town on Friday and promptly took a nap in my hotel room…party animal. But later on I went over to Austin Speed Shop for their pre-party and for the the screening of Brian Darwas’ film “A Sweet Sickness: The Flathead Movie” Arriving fashionably almost late the place was packed.

NotStockPhotography was there with his wife and their kool Corvair Van.

Tons of killer rides in the parking lot, tons of great people milling about.

Then I met up with the crew from Pushrod and we set out for the Continental Club to catch Dave Alvin on stage. Wow! that was a great show. I highly recommend if he’s coming to your town you need to be in the audience. I was blown away by the whole performance.

That’s it for Friday, I’m heading off to the day job for now but I’ll post more when I come home for lunch. Click on any of the photos to see the whole gallery, there are about 200 that are currently uploading so they won’t be available for an hour or two.

Here’s a couple cell phone pics from the end of our Friday night watching Dave Alvin at the Continental Club.

So Saturday morning I roll over to Camp Mabry, it was the first time that I ever was carded to get into a car show, a new experience but to be allowed to have the show on the base was very cool indeed.

The backdrop wasn’t as cool as the power plant last year but that was almost a once in a lifetime type background for a show. There were plenty of interesting sites to look at, I didn’t get to go checkout the museum and I regret that now.

The temps were decent but the wind was not, after braving the cold most of the day I finally broke down and bought a Austin Speed Shop hoodie, yes I’m a wimp.

Remember to click on any of the images to see the whole gallery.

Thanks for taking a look everyone, I hope I can make it feel like you were there in some small way.