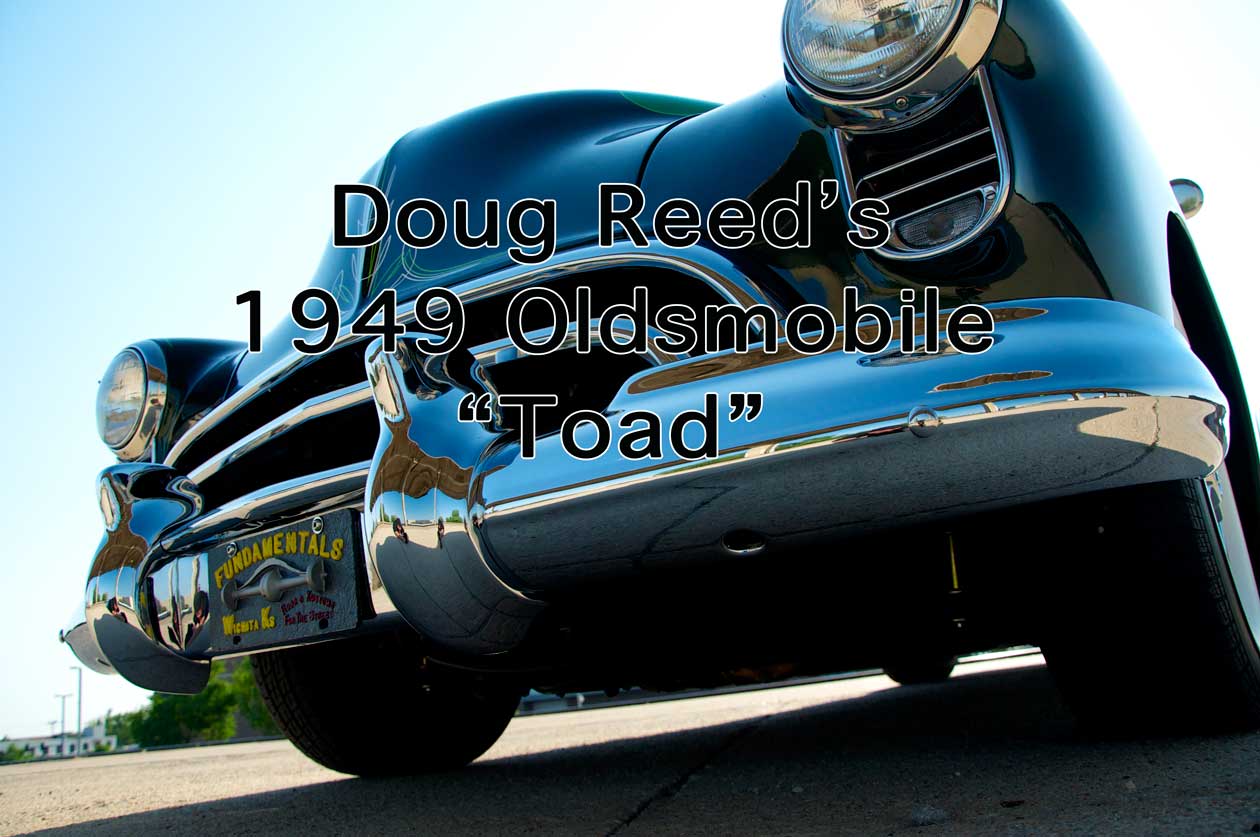 It’s hard for me to come up with something to say about this car and it’s owner, Doug Reed. Doug has become a great friend and mentor of mine over the last few years. He’s been covering the hot rod/kustom scene in this area for over 3 decades, doing his part to get publicity for the talented builders and dedicated car owners of the region, just as I am attempting to do now. No words that I come up with express how much I dig this car and the man that owns it.

I shot this gallery of Reed’s “Toad” the 1949 Oldsmobile in 2012 for Car Kulture Deluxe issue #57. Along with these photos I wrote an article. The basics are this, he’s owned the car since 1969. Doug’s a long time member of the Fundamentals car club of Wichita, a group that has been overwhelmingly welcoming to me over these last few years. Most of the guys in the club are in their 60’s and most of them have collected kool rides for decades, quite a few keeping them like Reed has kept the Toad.

The paint job in Midori Sour with Rainforest Green scallops tipped with Aztec Gold and is a modern recreation of an earlier rendition by the late Elden Titus & KKOA Founder Jerry Titus, in a style inspired by the late Larry Watson. This reshoot was by Mike Schoech of Auto Artistry in Russell, KS who painstakingly recreated the Titus brothers original 1978 layout. The Olds body has been nosed, decked, shaved handles, rockers have been flared, antenna frenched & the rear wheel openings have been modified resulting in a subtle kustom look. Rocky Burris Jr. is the pinstriper responsible for pulling the lines on both the exterior of The Toad & on the dash.

No kustom is complete without the proper stance, in Wichita the proper stance for a kustom is a bit different. The “Wichita Stance” as described by members of the Fundamentals car club has a bit of a forward rake, not quite a hot rod rake just a slight forward lean. Fundamentals say their hot rods have always had a bit of kustom & their kustoms have a bit of hot rod flair. The Toad’s suspension is stock in the rear with the exception of some 1974 Cutlass coils, in the front a set of cut coils set the proper height. Diamondback white walls on 15″ Chevy truck wheels reside at the corners with Olds discs up front & stock stoppers in the rear.

Reed has owned The Toad since 1969 and the custom started changing very early on. These days the Olds is powered by a triple Rochester carb’d 1958 Oldsmobile J-2 engine with Offenhouser valve covers. Spark is from a factory J-2 distributor updated with Pertronix electronics. Dual exhausts are given that “just right” tone by a pair of Mellowtone mufflers. The J-2 is backed up by a 1949 hydramatic transmission & stock rear end. The Toad is no trailer queen, being driven to shows across the region.

Doug has been an amazing mentor to me since my first article was published in a magazine. As soon as he sees any ink I’ve gotten, he calls to congratulate me, I have to admit it still gets me a tiny bit when he does. Thanks Doug for having me shoot the car for the CKD feature, for all of the stories and for being a friend.