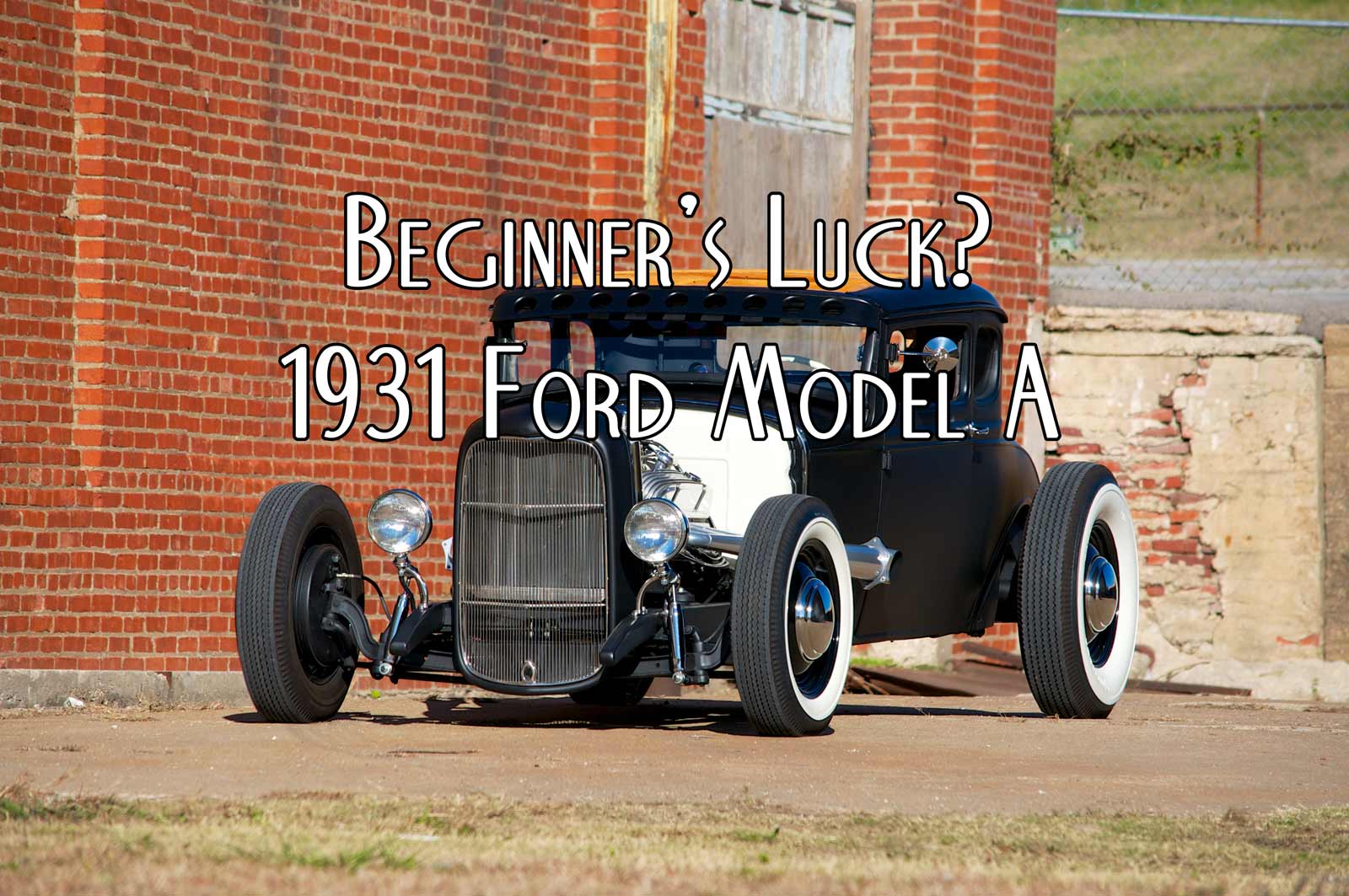 Sometimes you have to practice for years to get good at something, other times you get it right on your first effort. Brandon McCullough from Tulsa, OK got this 1931 Model A right on his first effort. As a kid he attended “every car show that we could find” with his dad who was always talking about wanting a hot rod coupe. After a few well detailed beautiful bike builds McCullough decided it was time to build a coupe for himself just like Dad had always wanted.

After looking at several Model A’s that sellers “wanted way too much for or they were just junk.” McCullough was checking the H.A.M.B classifieds 4-5 times a day, trying to make sure he was the first to find the new listings. Sure enough that plan worked when he saw this 31 Model A for sale in San Jose, CA and a game of phone tag broke out. Finally that evening while McCullough was out for some drinks with friends he got a call back from the seller. Heading to the parking lot  to get away from the crowd McCullough found out that the seller had committed to sell the car to a buyer in Sweden. It didn’t take long for McCullough to start giving the seller a bit of hell for sending good American iron overseas when there was a buyer right here in the States that wanted it. Shortly after that the deal was struck. Back in the bar the purchase was a cause for celebration.

Three weeks later the Model A showed up in Oklahoma including numerous parts and 2 engines, one was the original four banger the other was a 5 year old but still plastic wrapped and crated fresh 350. The car had looked a lot better online than it did in person but that didn’t matter at this point, it was time to get started. In order to get the project off to as quick a start as possible the car was sent over to Hot Rod Garage in Sand Springs, OK to get the power train mounted into the modified original Model A frame before the car came back to McCullough’s garage for him to get to work on the project. Several months of work went on there before Brandon met Dennis and Anna Bunyard of Collinsville, OK.

After seeing several builds that the Bunyard’s had completed the A made the trip to their shop. True hot rod mentors, the Bunyards allowed McCullough to come out to their shop and work on the car along side Dennis whenever he wanted, offering a helping hand, and bits of advice along the way. It took about 6 months of that effort to get the car to pretty much the state that it’s in now.

The stance is right, the look is a classic one with the flat black body, gleaming white firewall, mean chop, GearDrive headers, 32 Ford grille and bias ply whitewalls. The crate 350 now sports Offenhauser valve covers and intake with triple Rochesters on top has a timeless look. The stance is handled by a 4” drop axle up front with Pete & Jakes chrome shocks and Lincoln brakes. The re-pop 32 grille sits between a pair of re-pop Deitz headlights and some Ford 16” diameter wheels with Firestone 5.50” rubber.

The 8” Ford rear end has what McCullough calls a too high ratio of 2.70, but that’s easily changeable in the next round up upgrades. Rear braking is by Chevy drums juiced by a master cylinder off of a 75 Chevy truck. Along with the rear gears the current frame will go away in the next round of upgrades. Another set of 16” dia. Ford wheels and 7.50” Firestones round out the rear. A 10 gallon fuel cell resides in the trunk, hidden out of the way.

“The day that the car came home, I went to the store, bought a case of beer and just sat in the driveway looking at the car. I was so proud of what we’d built. I just couldn’t believe I finally had a coupe!”

On the inside it’s bare bones minimum for now. A Brookville 32 dash with a Karl Kinect engine turned insert filled with Stewart Warner Wings gauges keep McCullough up to date on all of the vitals. A Limeworks 40 Ford steering wheel sits atop a quick disconnect column in front of the modified Chevy Suburban seat covered in a Mexican blanket (or as my buddy Arturo says, where I come from we just call that a blanket…). Amongst the plans for the next round of updates is to finish out the interior with door panels and other such refinements.

Weather permitting the car gets out of the garage a couple of times a week, McCullough says “I love to just drive the car.” It took about 2 years to get the car to where it is at this point, in that time I’ve seen it in Tulsa in the Starbird show, in Austin at the Lonestar Roundup and at the Hot Rod Garage Open House this fall, I’m sure that after this next round of upgrades I’ll be seeing it all over the place.

**** To get this blog delivered to your email inbox every time it goes live, go to royboyproductions.com and subscribe at the top right corner of the site. ****