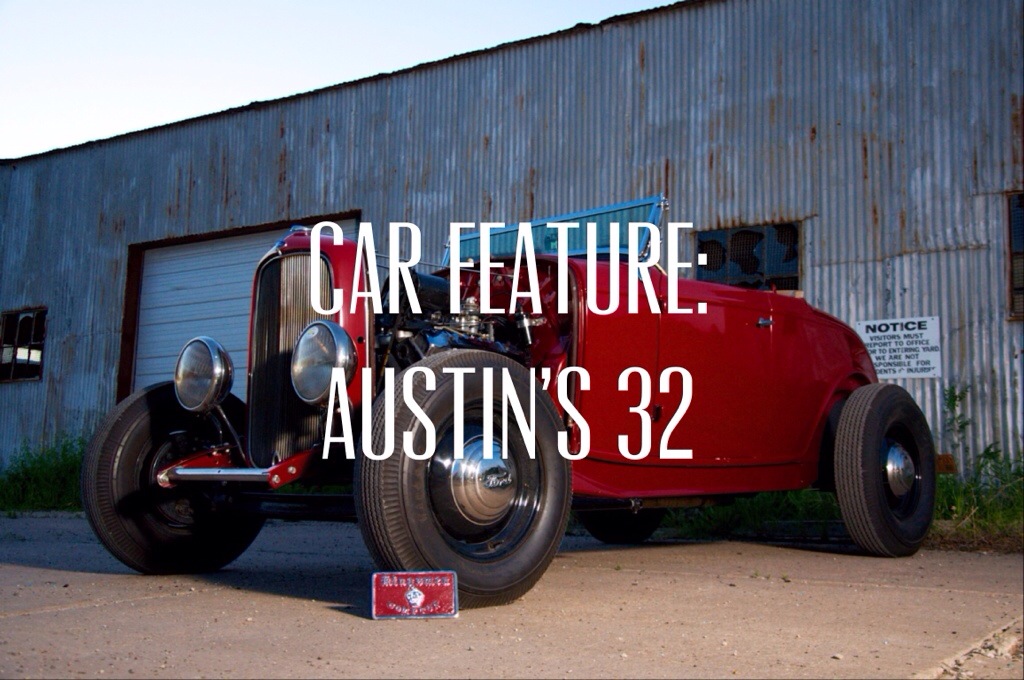 Often when you find a great looking ride on the streets or at a car show, you find that the owner is typically a bit older and has had decades worth of rides to practice on before getting to this great one. It’s rare to find a young owner with a great car, and to find one that’s 22 and built it himself almost never happens. So when I first saw Austin Grabowski roll into the Starliner car show at Wichita’s Kansas Aviation Museum, I admit it, I assumed it was a car that had been passed down to him. That first impression was dead wrong.

Click here to buy a print of this image, click the image to see the entire gallery.

While attending McPherson College’s Auto Restoration program Grabowski assembled this immaculate 32 Ford Roadster almost single-handedly in a storage unit in his spare time. The entire car “from the motor, trans, chassis, paint, body, front and rear axle” were built by Grabowski in his storage unit with engine help from his boss Jerry Phillips at Phillips Motor Sports in Galva, KS. That’s right, on top of a full load of courses in the restoration program and building a bitchin’ 32 Roadster in his spare time Grabowski also held down a job at an engine shop, this man is not afraid of hard work.

Austin grew up with hot rods, and recalls stories of getting rides to school from his folks in his 32 Ford 3 Window Coupe. “I also have heard stories of my mom once dropping me off in front of my elementary in the 3 window and as she pulled out of a parking lot saw a car coming faster than she first thought. She then slammed her foot on the throttle and blew the tires pretty much off the car with smoke poring out from behind the car doing a burnout all the way down the street. When she came to pick me up in that same car the principle and my teacher were waiting for her to show up and yell at her for “showing off” in front of the school. From what I have heard my mom pretty much ripped them a new one because she was not willing to wreck the car my dad had owned since he was 18 years old.”

The roadster version of the 32 was on his mind from the time he was a little boy, reading his dad’s old hot rod magazines, seeing “pictures of these men building cars that were pieced together part by part making them as fast and as light weight as possible. The roadster always caught my eye with slim body lines, no roof and it was the lightest car possible.” Austin had the passion for cars at a young age from the rides in his dad’s 3W that turned into him getting behind the wheel of his first race car at the age of 6, something he’s done to this day. “Burning rubber and 32 fords were always in my blood from the start and a roadster was best way for me to get into the legendary deuce.”

Over an 18 month process Grabowski went from an American Stamping Corporation frame to the finished car, painting it twice.  He built the frame from pieces found around Kansas, it now sports a 40 Ford X-member, original model A Front suspension with an early heavy 32 Ford axle and 36 Buick knee action shocks, and stock 32 Rear suspension. Steering is handled by a 46 Lincoln Zephyr wheel atop a stock locking drop column with a stock 32 steering box. Braking is handled by a 40 Ford master cylinder and 39 Ford front and rear brakes. The wheels are 40 Ford 16” with 600 Firestones on the front and 750’s on the rear.

The 54 Olds 324 Rocket engine has been bored .060 over and decked .060 total for compression. Isky adjustable rockers sit in the factory Olds heads, internally the engine sports flat top pistons, with compression “so high I had to get a high-compression starter,”  a N.O.S. Chet Herbert cam with a “super secret grind.” He can’t tell us what that grind is or he’d have to kill us. A Cragar 4×2 manifold topped with 4 rebuilt and balanced Ford 94 carbs handle the engine’s intake. The exhaust side of the process is handled by the stock cast iron manifolds into straight pipes for a mean sound. 57 Olds J2 valve covers were added to clear the adjustable rockers, which combined with the 4×2 intake makes for a great look and a stout runner.

The engine was built by Grabowski and his boss Jerry Phillips. Backed by a remanufactured Ford clutch and high pressure plate and a “junk” 1933 top loader that has had to be rebuilt 3 times by Grabowski. He admits that is the only thing he’d change in the build, swapping the 33 non-synchro trans for a 39 top loader.

Inside the tuck and roll seat bottom and smooth top section was done in maroon with black piping by Grabowski. the stock 32 dash now sports 50 Buick gauges. As of right now the doors and floor are not upholstered, Grabowski jokes that the doors will stay that way to prove to people that the car is steel since most think that it’s fiberglass. The stereo duties are handled by an iPod and ear buds, with air conditioning controlled by how far you push open the windshield.

This hot rod is no show queen, after finishing the build the car became a daily driver for Grabowski as he finished the Auto Restoration course at McPherson College, racking up over 11,000 miles in the first year. Over the course of the build the hardest part was not day dreaming about the car while he was in class, knowing that the project awaited in the storage unit across the street from the school. Now that Grabowski has moved back to his native California he’s continued putting miles on the car including a 7 hour drive up and down the PCH 1.

This 32 Roadster is the culmination of a childhood dream and the passion of a life long gear head. Built to be driven with all pre-58 parts this is a fantastic example of a traditionally styled hot rod, one that is surely turning heads in California as it was back here in Kansas. At his young age of 23 now, I’m betting that we will see many more impressive builds from Austin Grabowski.