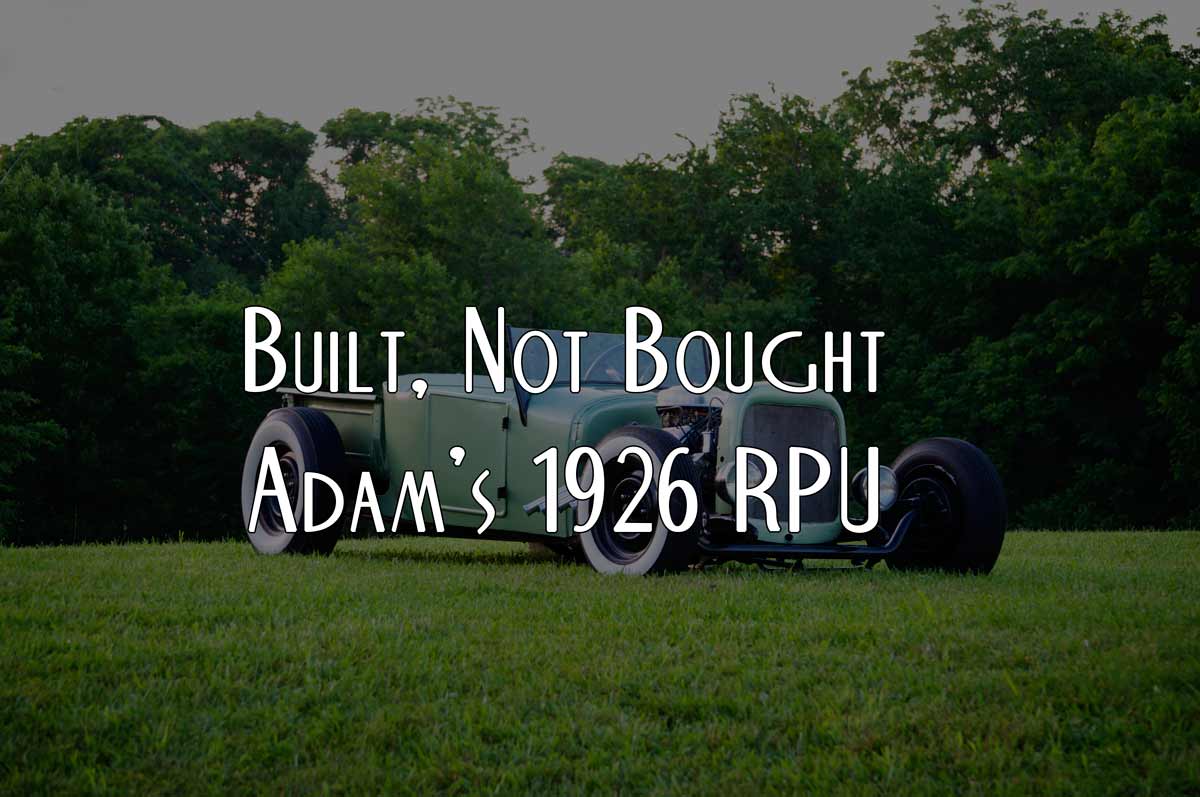 The phrase “Built, Not Bought” gets ballied about quite a bit these days. Not all of us feel up to the task of building our rides, yet. So when you see a guy at a show that isn’t advertising that it’s “Built, Not Bought” you find yourself assuming that maybe it was bought or at least paid for and shop built. Not the case with this 1926 Ford RPU. 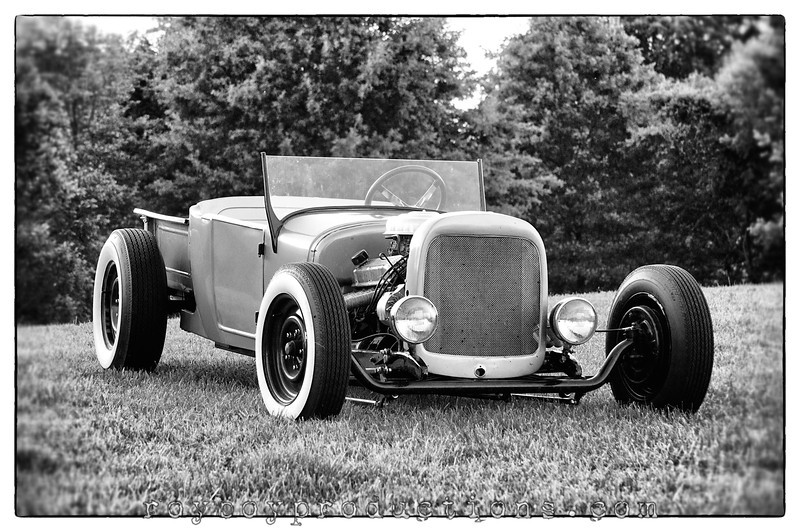 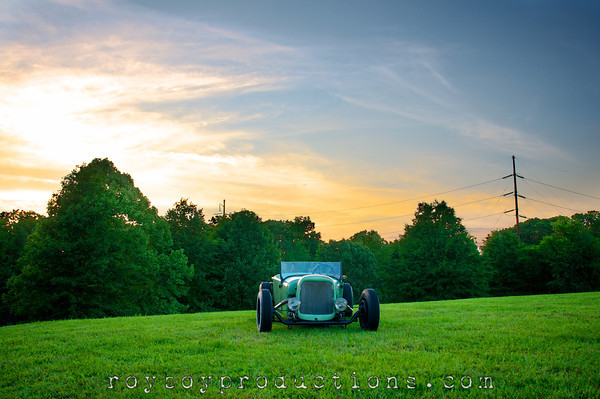 Owner Adam Emery not only built this rod himself, he detailed a build thread on the H.A.M.B. on the progress. The RPU caught my attention on Friday at the 2014 Lonestar Roundup, then again at the Stray Kat 500, so when I found myself looking at it again at the Queen City Riot I knew it was time to capture some images of the ride and get the story for all of you.

It all started with a body. Emery had been a fan of the RPU look for awhile and after coming across one not too far from home online, he went and had a look. Lucky for him, the body’s owner had a bed as well. After so negotiations the old sheet metal was on the way home with Emery. The body has been channelled down over the frame 2”, the cowl vent has been filled and the Model A bed has been shortened 2’. The body needed some patching, so a new back section was purchased from Howells to fix it up, other than that it was in pretty good order. One door needed replaced and lucky for Emery he had a friend with some spares. A Model A grill shell was found, de-arched on the top to match the cowl. 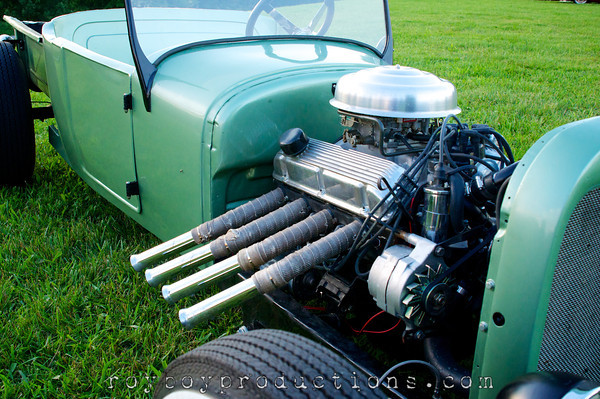 The Cascade Green color was decided on after Emery saw it on a 1960 Corvette. After building a makeshift booth and dust suppression system in the garage, Emery laid down the vintage color and some clear. As of right now the paint is bare but plans are for some pinstripes at a later date. 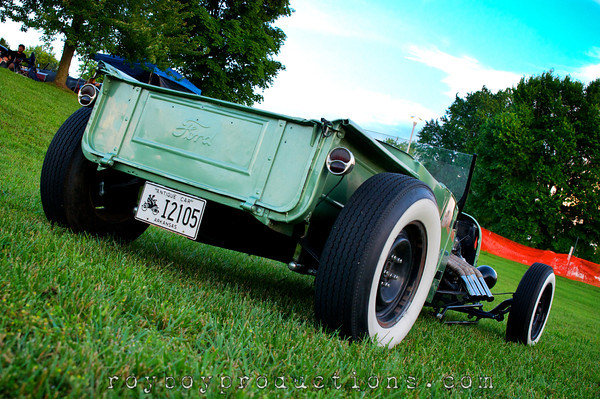 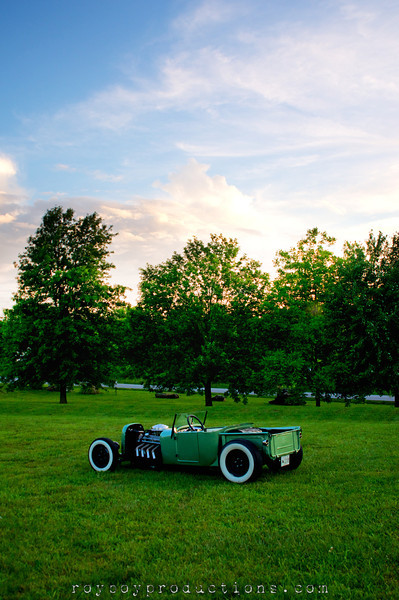 The frame of the RPU started life as a Model A which Emery bought at a deal from a friend who wanted an A on Deuce rails. The front half of the A frame was retained, although the unused holes were filled and the frame was boxed. The part of the frame under the body was home built out of 2”x3” steel tube and stepped up a few inches. The frame also retains the original A crossmember. Front suspension for now is a 6: drop spring behind a tube axle, Emery says if he had it all to do over again he’d run a dropped I-beam unit. Judging by how he’s done everything else on the project his way, I wouldn’t be surprised to see that change down the road a bit. Front brakes are 1950 Ford F1 units while the 1965 8” rear end from the Mustang retains it’s original brakes and is suspended with a Model A buggy spring triangulated 3 link. The rollers are 15×5 steelies up front with Cokers wide whites and 15×6’s in the rear with vintage Sears wide whites.

The 289 engine and it’s mated C4 transmission were donated by Emery’s father-in-law who pulled them from a 65 Mustang that was being turned into a race car (I’m gonna want to see some pics of that Adam). The free motor & trans got some new paint and other goodies such as a Pertronix bug in the distributor, Weiand intake, an old carb which just needed cleaned and adjusted, and owner made custom headers. After going through a few choices in his head Emery decided to build his own headers to mimic some that he’d seen in some 60’s show pics of similar hot rods. A box of bends and some flares gave him the parts it took to build the headers, some exhaust wrap helps keep the heat in the tubes and away from the spark plug wires and paint on the heads. 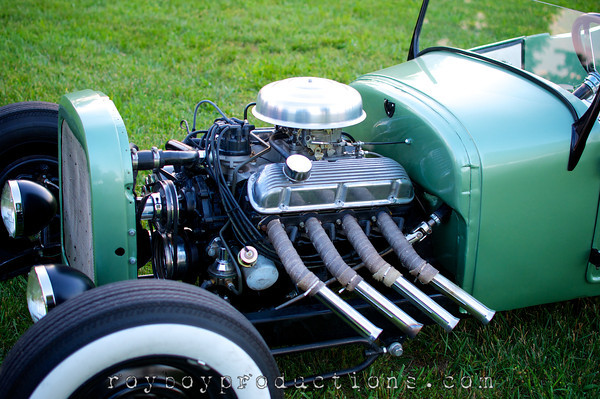 In the cab, the steering column is equipped with a quick release and Grant steering wheel, the upholstery is again owner built foam pads wrapped in white vinyl with the same vinyl on the door panels. The dash holds some Stewart Warner gauges, and custom aluminum master cylinder cover. 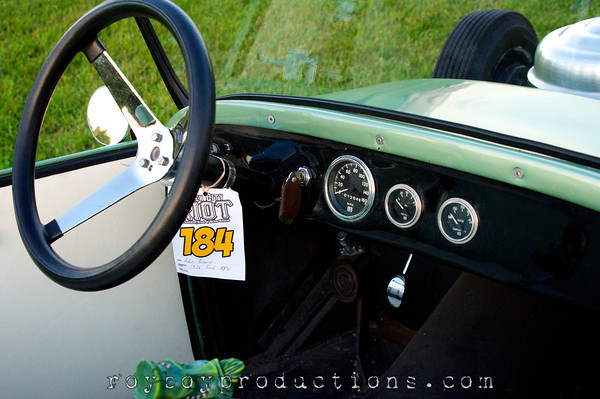 Not one to shy away from any part of the build Emery not only wired the car himself but created the wiring harness from scratch. After some internet research and planning the wiring out on a sheet of butcher paper it was time to tackle the job. In the end Emery feels he has much more of an intimate knowledge of wiring than had he hired the wiring done or bought a harness. 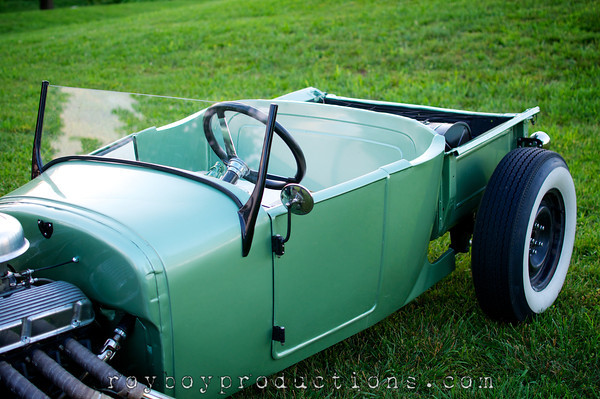 After the RPU was finished it was time to do what it was built for. Drive. Emery chronicled the first 1000 miles of the RPU’s life with a thread here on the H.A.M.B. The first 1000 miles weren’t without incident, 100’s of miles from home in Austin for the Roundup, the old C4 gave up on Emery. After towing the car back home, which meant he had to drive the 32 that had been in his friend’s trailer (poor Adam, here are some pics of the 32 with the Fast AL’s Upholstery). With time running out before the Stray Kat 500 another C4 was sourced and the long and difficult project of swapping it was handled. From the 1000 mile thread, “So I spent a day disassembling the front and unhooking everything to the engine, another day pulling out the motor and swapping trans. Then another day putting it back in and the fourth day re-assembling everything.”

From there it seems that the RPU has had a smooth life. Enjoying some of the best shows in the country being the Stray Kat 500 and the Queen City Riot where the RPU brought home a bitchin’ trophy.  Thanks Adam for allowing me to shoot your ride and share your story with all the folks here, it’s an honor to be able to tell the story of your Built, Not Bought hot rod.

PS: All photos on this page are available as prints up to poster sizes. Buying them not only makes your walls cooler it puts gas in the tank to get me to another car show or feature shoot. Please consider buying a print, if you can’t do that, I understand. IF you like this post, share it with your car friends using the social media sharing buttons below or just by sending them the link to this page. Every set of eyeballs on the site helps!