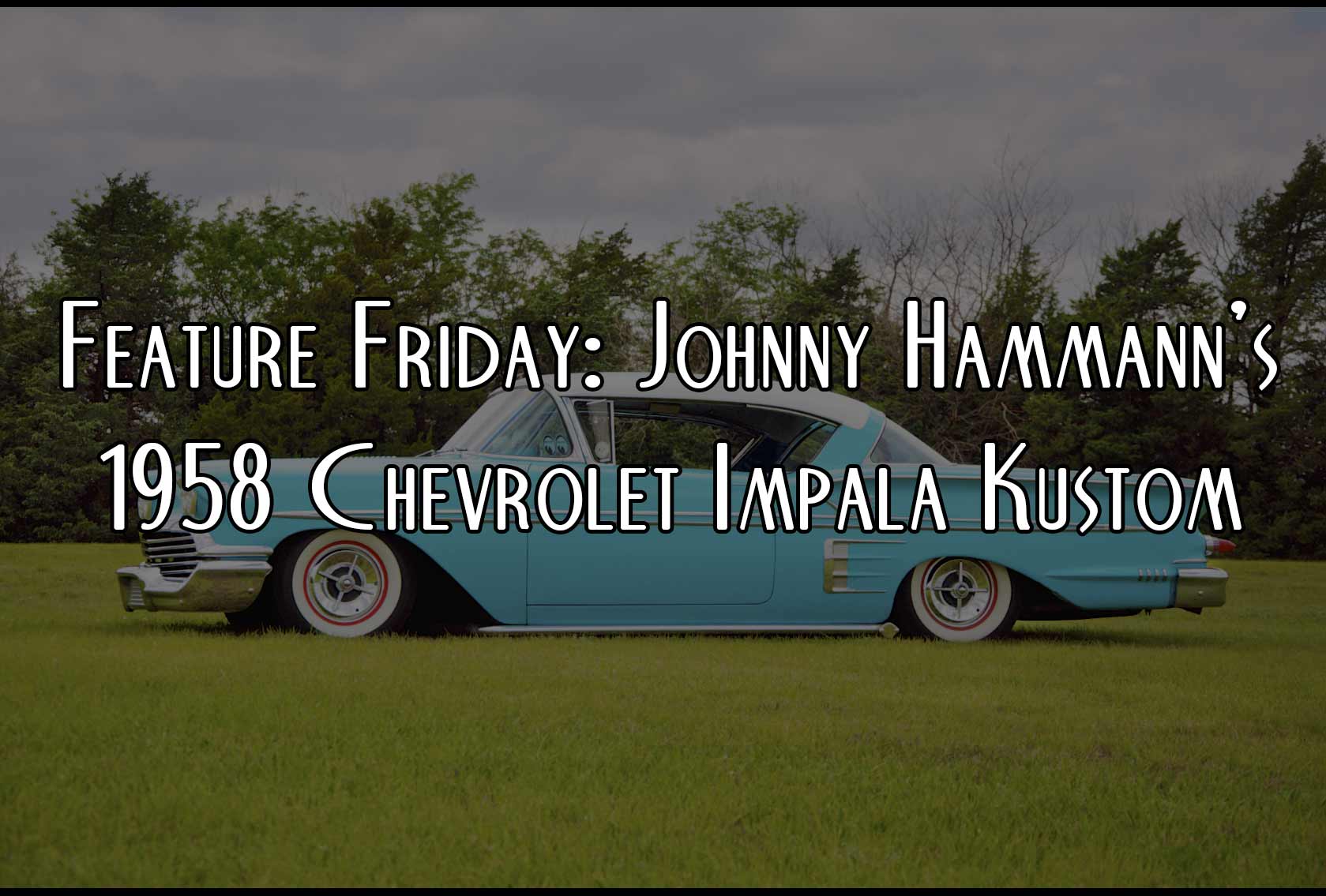 As Hot Rod Walt alluded to recently on Episode 9 of my Chrome Pipes & Pinstripes Podcast the current state of kustoms would not be where it is without the hard work of the Kustom Kemps of America. The KKOA’s Leadsled Spectacular started in the Wichita, KS area not just because that’s where Jerry Titus was from, but because a group of folks in Wichita never lost the kustom faith when the rest of car world became muscle car and street rod obsessed. 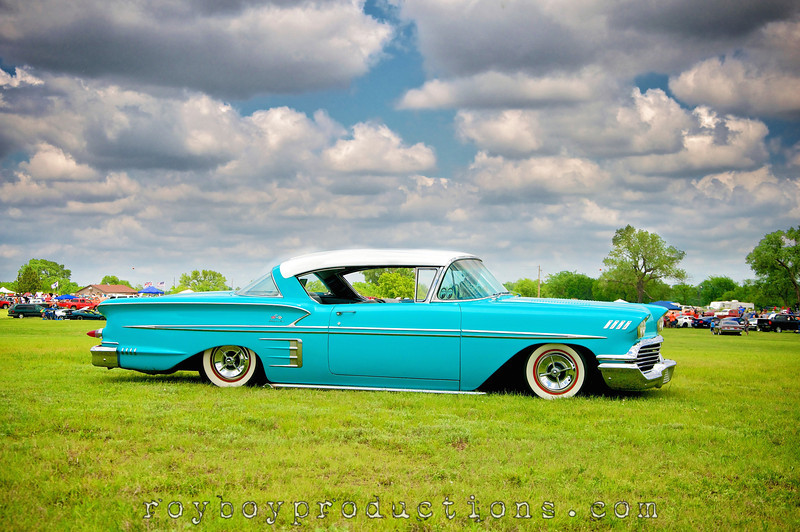 When I first became acquainted with the group of folks from Wichita that to this day keep the kustom faith there were a few that stood out. Old timers to some. Legends to others. One of those was Johnny Hammann, his 1958 Chevy Impala has been a Wichita mainstay for decades. It’s simple mods, slammed stance and the always infectious personality of Hammann make both the car and the man must see parts of many car shows in the area.

In 1969 Hammann and his new bride had two non running rides, they were hoofing it. A look in the paper lead them to call on this 1958 Chevy Impala. The owner talked down the car but Hammann saw it as a much nicer ride than the owner and before long the Impala had a new home. Hammann’s father sold new Chevy’s from around 1947 through around 1960, so Hammann had a thing for the cars. He remembers seeing his first 1958 model and being an immediate fan of the design. For the next few years, his Mrs. drove the 58 as a daily driver until a ill timed accident when she was 1 week overdue with their son. As she tells the story, she was fine however the Wichita PD officer was a bit unnerved by the situation and wrote the paperwork as fast as he could to avoid possibly having to deliver a baby.

For the next few years the car sat by waiting. Finally it was time to bring the 58 back to life. The car needed a new hood and Hammann found another 58 hood that had been pancaked and louvered by Darryl Starbird’s Star Kustoms in Wichita. At that time the front end received an altitude adjustment as well. Hammann and a friend built their own drop spindles for the car since none were available for purchase at the time, remember this was the mid 70’s and for the general public of the car world, kustoms weren’t kool. A couple of coils cut out of the front springs finished off the front end suspension lowering. 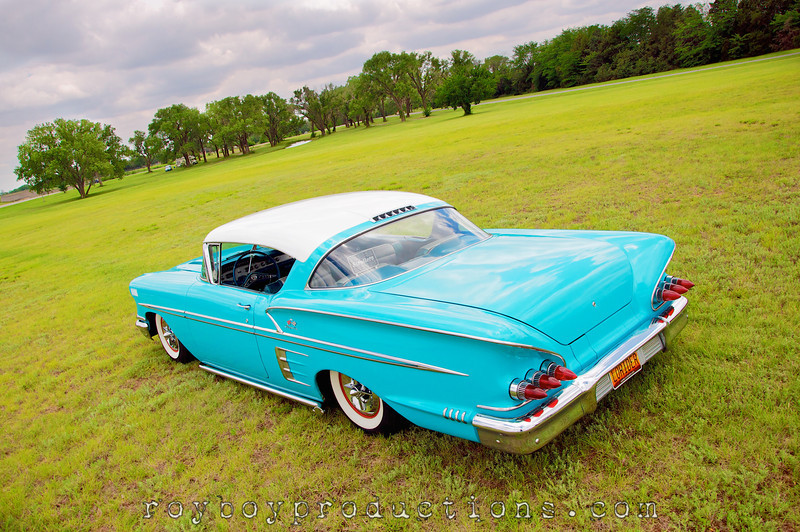 At that time the car had sort of a street freak look to it, high in the back low in the front with Cragars all around. It wasn’t too long before that look wore thin and Hammann decided to go with the look that the car still carries today. Cutting a couple of coils in the back and putting the car on red steel wheels with wide whites and hubcaps gave it a timeless classic look. The Cal Customs tube grill in the car was found as a NOS part in the basement of a speed shop when it closed. The front fender side trim was removed and replaced with an extra piece from the rear, both with the center section removed leaving a final product look like it was meant to have come that way from the factory. The 6 impala taillights were given 1959 Cadillac taillight lens and basically that wrapped up the exterior. The paint that is on the car now was laid down January 1, 1976 and is the stock color with some extra pearl added.

Under the hood the stock 283 still resides, but now has a 3 deuce setup, the center carb is actually the stock 2bbl unit that came with the car. A couple of dress up items were added over the years as well, but this is a kustom so the hood remains shut as it’s supposed to. The interior is plush and comfy, I got to take a brief ride in the car to do these photos. 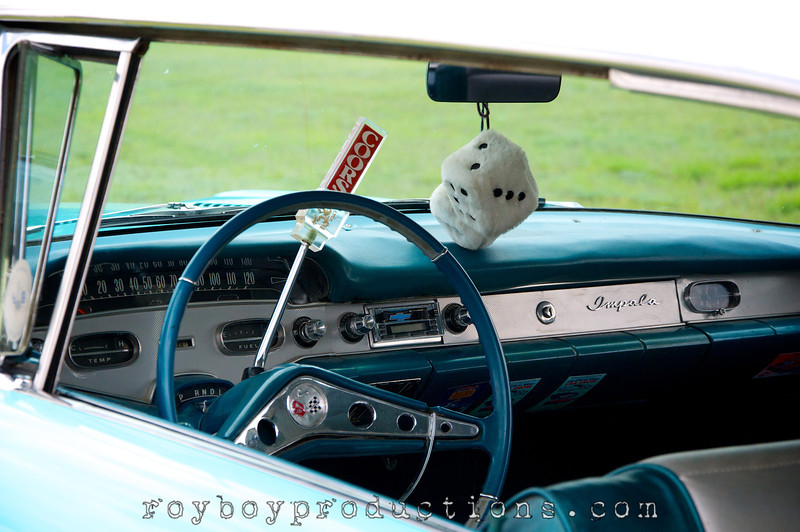 This car is the epitome of a mild kustom. Simple lowering, some trim changes, just a basic restyling of an already great looking car. That’s why this car has been timeless for 3 decades and continues to draw the eyes of fans of kool wherever it goes. 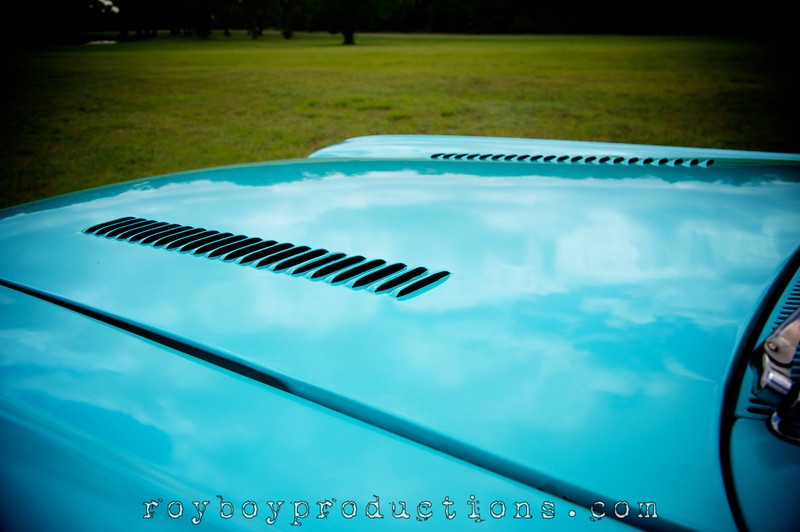 Thanks Johnny for keeping kustoms alive. I look forward to seeing you at every show, there is nobody that is more fun to hang out with than you!

PS: All photos on this page are available as prints up to poster sizes. Buying them not only makes your walls cooler it puts gas in the tank to get me to another car show or feature shoot. Please consider buying a print, if you can’t do that, I understand. IF you like this post, share it with your car friends using the social media sharing buttons below or just by sending them the link to this page. Every set of eyeballs on the site helps!