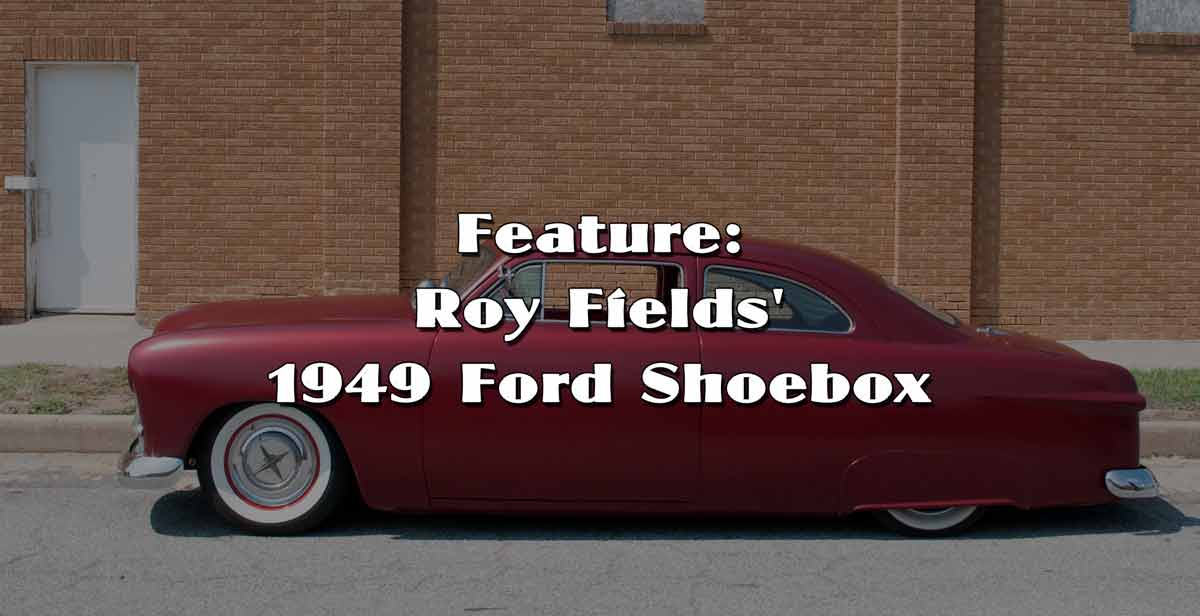 “You’re going to want to replace that flathead.” That’s the first words of many people when we talk about my 51 Ford. They tell me how they would be good for tooling around town or this or that but for the amount that I drive I’m going to want to replace it with something more powerful and modern. My counter argument is Roy Fields’ 1949 Ford. Not only has this car been all over the country including taking Fields to Bonneville to run he and his brother’s LSR car. Tales of that drive include extended high speed runs proving the motor’s longevity.

Fields handled most of the car himself, his brother Justin who now handles the body work on both the LSR car and the FED that they are turning into a Jr. Fuelie car let Roy do it himself. Roy says that’s so if something was messed up then Justin could make fun of him, I have a feeling that was only part of the story, Roy wanted to do it himself.

The 49 Ford received a handful of tasteful body mods. The top was chopped, not too much, but the just right amount, the doors were shaved as well. The stock bumpers and grill were retained while the head lights and tail lights were frenched. Roy points out that the stock stainless steel rings were used to french the headlights, something that people usually ask him about, that was no kit, just the real headlight rings. The gas filler door was shaved and the license plate was sunk into the trunk lid. To round out the body some skirts were added in the rear.

Running gear in this car is strong. A ride around with Roy behind the wheel proved that a flathead was all I really need power wise in my own ride. The flathead received a Speedway 274 cu. in rotating assembly and some show and go fast goodies. Offenhouser heads & triple carb intake sit atop the gold painted beautifully detailed engine. A Mercury timing cover and distributor were located because the timing cover has a spot for the extension on the end of the distributor shaft to help keep it centered. A Pertronix

unit was then installed. Some modified Speedway headers handle the exhaust, the passenger side was a decent fit, the driver’s side had to be modified to clear the steering box. For cooling Roy used a radiator our of a dirt track car turned up on end with new inlets and outlets. An Offenhauser bell housing mates the flathead up with a T5 5 speed out of a 4 cylinder S10 pickup (here’s a great source of info on the T5).  A Ford Maverick rear end with 3.08 gears puts the power to the rear wheels.

When it comes to getting a car looking right, you can do a lot of things but in the end, stance is everything. To get the front end of the shoebox down a set of Fatman Fabrications dropped uprights were installed along with some custom made pieces from extra parts from the LSR car build. In the rear the springs were de-arched and some blocks were added to get the stance just right. The static drop is low, and it does scrape but that’s how Roy wants it, he doesn’t like bags and was brought up with lowered cars, its a way of life in the Fields’ family. 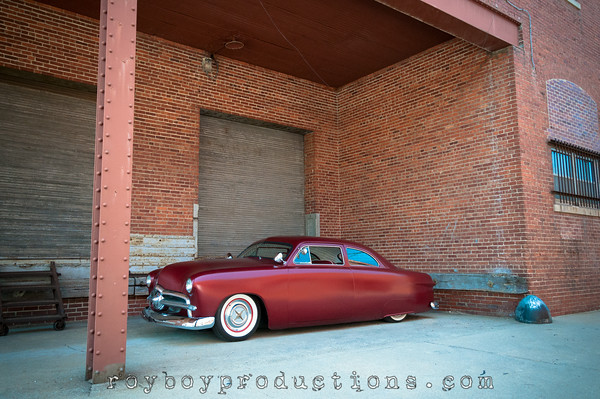 When it came to the interior, childhood friend and upholsterer Johnny Torres. Torres’ shop is across the street from the Fields family shop in Hutchinson, KS. The interior was one of Johnny’s first. The dash was chrome plated by Jackson Plating in Kansas City before it was pinstriped by Justin Fields, who also striped the firewall. 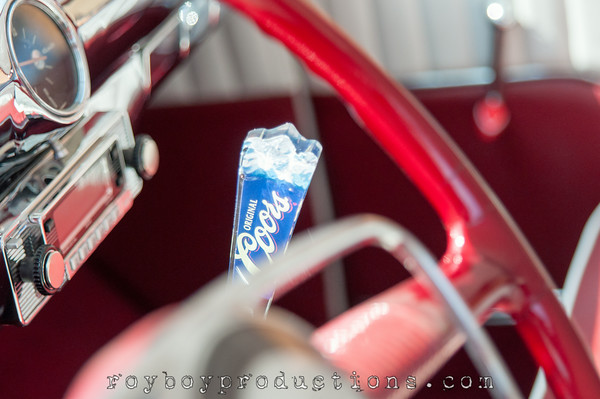 This simple yet clean kustom is everything that a guy could want in a straight up driver shoebox. Plenty of go, great looks and it is good to go on any road trip nationwide. And the drivetrain is proof to me that I am on the right track.

Don’t forget the Royboy Merch!!!! I have keychains, coozies, stickers & hats for sale. All Royboy photos on this site are available as prints up to poster sizes. Buying them not only makes your walls cooler it puts gas in the tank to get me to another car show or feature shoot.

Want great photos of your ride? Contact me here to find how to book me to shoot your ride!