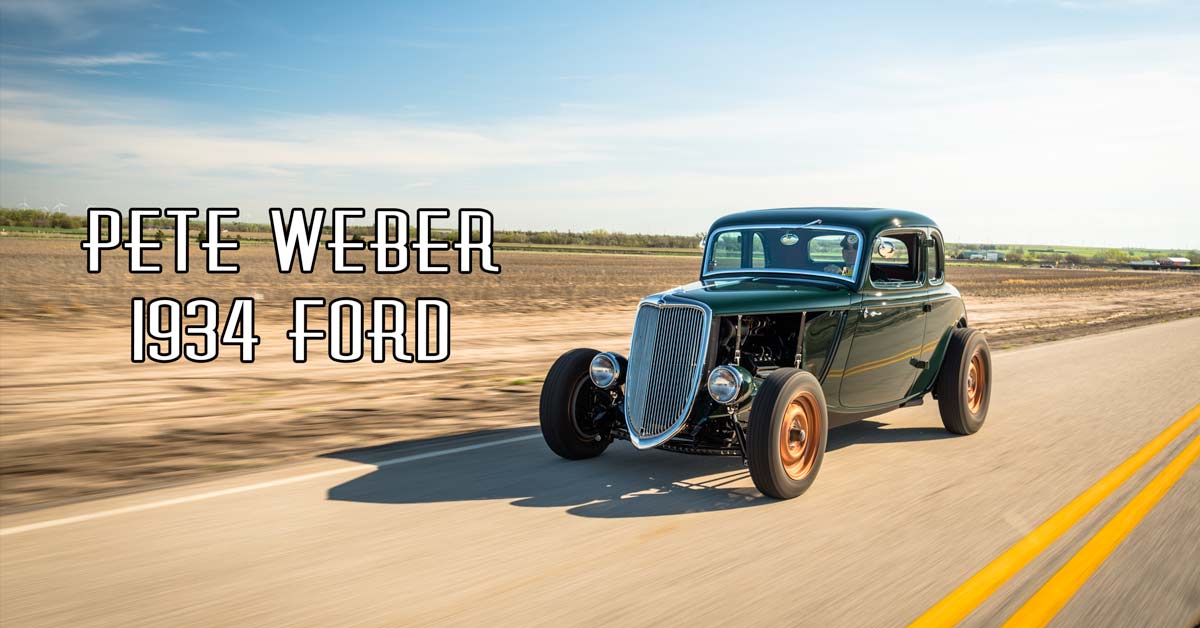 More than 20 years after working for Pete Weber as a teenager, Mike Keller of Big Creek Restoration in Ellis, KS is still working for him. Now it’s a bit different work, after finishing a killer 39 Mercury street rod Weber and Keller were at Great Bend, KS for a drag racing reunion meet when they saw a 1934 Ford that they both liked. Both agreed that the 33-34’s if done correctly could be timeless traditional hot rods, which planted a seed for this project

More than 20 years after working Pete Weber as a teenager, Mike Keller of Big Creek Restoration in Ellis, KS is still working for him. Now it’s a bit different work, after finishing a killer 39 Mercury street rod Weber and Keller were at Great Bend, KS for a drag racing reunion meet when they saw a 1934 Ford that they both liked. Both agreed that the 33-34’s if done correctly could be timeless traditional hot rods, which planted a seed for this project.

Keller knew of a 1934 Ford in the western KS town of Wakeeney that was available. The body had minimal rust so it was a great project starter. We all know shops that build cars that are basically just ordered parts bolted together. There’s nothing wrong with that at all, but this isn’t one of those cars. Even with the parts that were ordered to help build this car, there are virtually no un-modified parts on the entire car.

Keller believes that a car’s stance makes or breaks a car so he started with a 1934 Ford chassis from the Hebron, NE based Cornhusker Rod And Custom.  The chassis ride height was established with a Posey’s buggy spring supported drilled Super Bell 4” drop axle with 1940 Ford spindles and 12” finned Buick drums up front. In the rear a limited slip 31 spline Mosier 9” Ford rear end with 4.11 gears and a Posey’s buggy spring set the height. Stock 11” Ford brakes handle the woah duties in the back and Pete & Jakes shocks dampen the ride all around. More Ford products finish out the braking system, Keller has a big time history with classic Mustangs and used a 1967 Mustang master cylinder with custom made pedal assembly and a Speedway Motors proportioning valve. 16” x 5” 1936 Oldsmobile artillery wheels with Coker Excelsior are at all 4 corners, 5.50’s in the front and 7.50’s in the rear give the perfect rubber rake. Keller used his lathe to turn custom caps for the rears to match the fronts.

After building an exhaust system that had both pipes exiting the back of the car Keller and Weber took a look and canned the idea. So the exhaust was redesigned to exit just in front of the rear tires. In much the same way that you’d C notch a frame for rear axle clearance, Keller built relief’s into the frame to tuck the exhaust up and out of the way. The stock 1934 Ford fuel tank was never meant for the general public’s eye and was a bit less attractive than say a 32 tank, Keller Z’d up the rear frame rails 2” to push the Tanks brand tank further up and then he built a custom cover to match the back of the car.

Even though the body was fairly rust free, that didn’t mean that it didn’t get it’s fair share of work. A custom firewall was made that mimic’s the original factory “X” but with two recesses for clearance. Big Creek Restoration has a ton of great equipment on hand to custom fabricate parts so this kind of fabrication is done when it’s needed. Keller took the front splash shields were modified in ways that most would never notice, the kind of work that fans of 34 Fords would catch if they looked really closely. Since the car is fender-less, the fender mounting holes were filled, and the top lip was removed and rolled for a cleaner look. Keller noticed that many builders notch the splash aprons to clear the Hemi valve covers but didn’t want to do that on this project. After looking inside the valve covers he discovered enough room to notch them to clear the splash aprons. On the roof an 18 ga. steel roof insert was rolled on the english wheel & wrapped in stock grained vinyl to continue the clean look. The body work was handled by Big Creek Restoration’s Allen Stouffer and BCR’s Jeremy Clark took care of spraying the custom green PPG paint.

Weber would stop by the shop from time to time with parts he was thinking of using on the car, Keller and he would discuss them and decide what modifications to make or what to keep or get rid of. Keller modified some 30’s era International headlights and some 37 Ford taillights with stainless steel accents. The headlight sit atop Ford F1 shock mounts modified to be used for this purpose and Keller built stands for the tail lights to mimic the front mounts.

When the 1934 Ford was picked up to start this project there was a 331 cubic inch industrial Hemi was sitting near the 34 and that became part of the purchase. The Hemi was run on propane during it’s service powering an irrigation system near Ellis, so when it was taken down for rebuild it was super clean inside according to Keller. The 1954 Chrysler Industrial 331 Hemi was sent to Walt’s Repair & Machine in Collyer, KS to get ready to serve as power plant for the 34. .030 over Egge pistons were utilized along with stock rods & the stock crank along with a Hot Heads Isky cam.

The stock cast iron heads got Hot Heads springs and the water pump got a Hot Heads conversion. Best Radiator in Hays, KS built a custom fit aluminum radiator which is cooled by a Cooling Components fan in a custom built shroud. The engine is topped by a piece that Weber found, a 2 x 2 Chrysler Marine intake with a pair of Holley 94’s each delivering 290 cfm to the Hemi. The Holleys are topped by a pair of vintage air cleaners that Keller found on eBay and modified so that you can’t see any mounting hardware. The spark for the engine comes from a Pertronix II with Mallory wires. The aforementioned exhaust starts with a set of 300C manifolds. Keller bent up some 2 ¼” Dia. tubing and ran it back to a pair of Brockman steel pack mufflers before exiting the custom built frame reliefs.

With an estimated 300+ hp from the 331 and a 4.11 rear gear the car gets up and goes pretty well, pinned me back in the seat when we were riding around. However this car was built to drive and not just from stop light to stop light but on road trips. A Camaro style T-5 transmission with a S-10 tail housing was used to get the power to the rear end. A slick BCR built a short throw shifter for the transmission sits atop the transmission.

Weber was never really a fan of the stock 1934 Ford dash so Keller found a 32 Ford Truck dash for the car. It was smoothed and a pair of gauges out of a 58 Pontiac are all that’s in the dash. Keller used a vintage heater box on the firewall to hide the controls for the Vintage air HVAC system and hidden audio system. BCR’s Brady Baumgarn handled the stereo and Rockford Fosgate speaker installation. Under the dash is a hidden tach on a hinged bracket that lets Weber hide it from view when it’s not needed. A Glide bench seat was modified by Keller before it and the rest of the interior were covered in a distressed tobacco leather by Vanessa Keller. The steering wheel started life as a 1950’s MG unit, and now sports a custom center section made from a belt buckle that was given to Weber. Keller turned it down in the BCR lathe to fit. The steering column was built out of a 1936 Ford torque tube and gives the interior a great look. A 1940 Ford rear view mirror and some reworked aircraft seat belts finish out the interior.

All of the chrome on the car was done by Advanced Plating in Nashville, TN and the wiring harness is from Rebel Wiring.