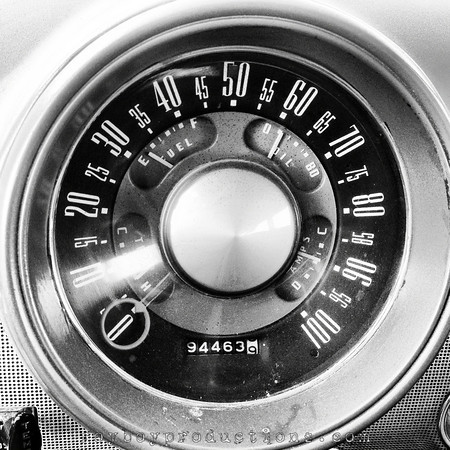 On Memorial Day 2012 my father, my nephew Gannon and I went to Kanopolis Lake about 40 miles west of Salina, KS with the truck and trailer to pick up my 1951 Ford Custom 2 Door Sedan. I’m hoping to do as much of this car as possible myself, and I’m no mechanic. This will be a challenge but I hope to show a bunch of you that you can tackle these jobs involved in bringing an old car back to life if you break them down into small jobs.

From the outside the car looks to be all there. While it wont start and the previous owner said that he drove it from Salina to the lake home, he said it was missing on a couple of cylinders by the time that he got to the lake.

After a quick hose down I see that the weather stripping is not doing it’s job, so I pull back the carpet where the water had dripped to see what was underneath and I find a flattened out Folgers Coffee can as a floor patch. No biggie the floors can be replaced.

The paint looks decent for the most part, probably a 70’s era re-spray, the trunk was in the sun for 8 years so it’s rather oxidized and faded. After a year, I finally got a space cleaned out in my garage at home and I drug the car home so that I could start to tinker with her and see if I could bring the ol flathead back to life. The factory front grille was removed to go on my buddy Jack’s 51 Ford Kustom that he’s just finished with the help of Chaotic Customs, Fast A.L.’s Upholstery and others, and it will be replaced with a 54 Pontiac grille that I have.

Wanting to do things myself as much as possible but knowing when to call in an expert, I had a friend rebuild the factory carb, if I had done that myself it would be months before I did it. So now with a new carb and a freshly charged battery I try to start the old girl. No go. Not getting a drop of fuel out of the fuel pump even though the bowl on the pump is full. A trip to O’Reillys and a new fuel pump is on the way. So next up is to swap the fuel pump and try her again.

Once the car is running and I can take it for the occasional drive up and down the block it’s time to save up for a wiring harness. The 60 year old cloth covered wiring is in bad need of replacement. In the mean time I have a set of Ford Aerostar springs for the front which will bring the front end down about 3 inches and give the car a better ride quality, for the rear my buddy Jack has given me a set of blocks to get the altitude right.

Power washing the gunk off the bottom of the car

Another upgrade that I hope to do soon is installing a 77 Ford Maverick rear end, from everything that I’ve read it’s a near perfect fit and a much higher quality rear end with a better suited gear than the factory setup. The 3 speed with OD should mate well with the new rear gears. Before I can install that I need to get a lesson in how to rebuild brakes so I can finish the Maverick rear end before it goes under the car.