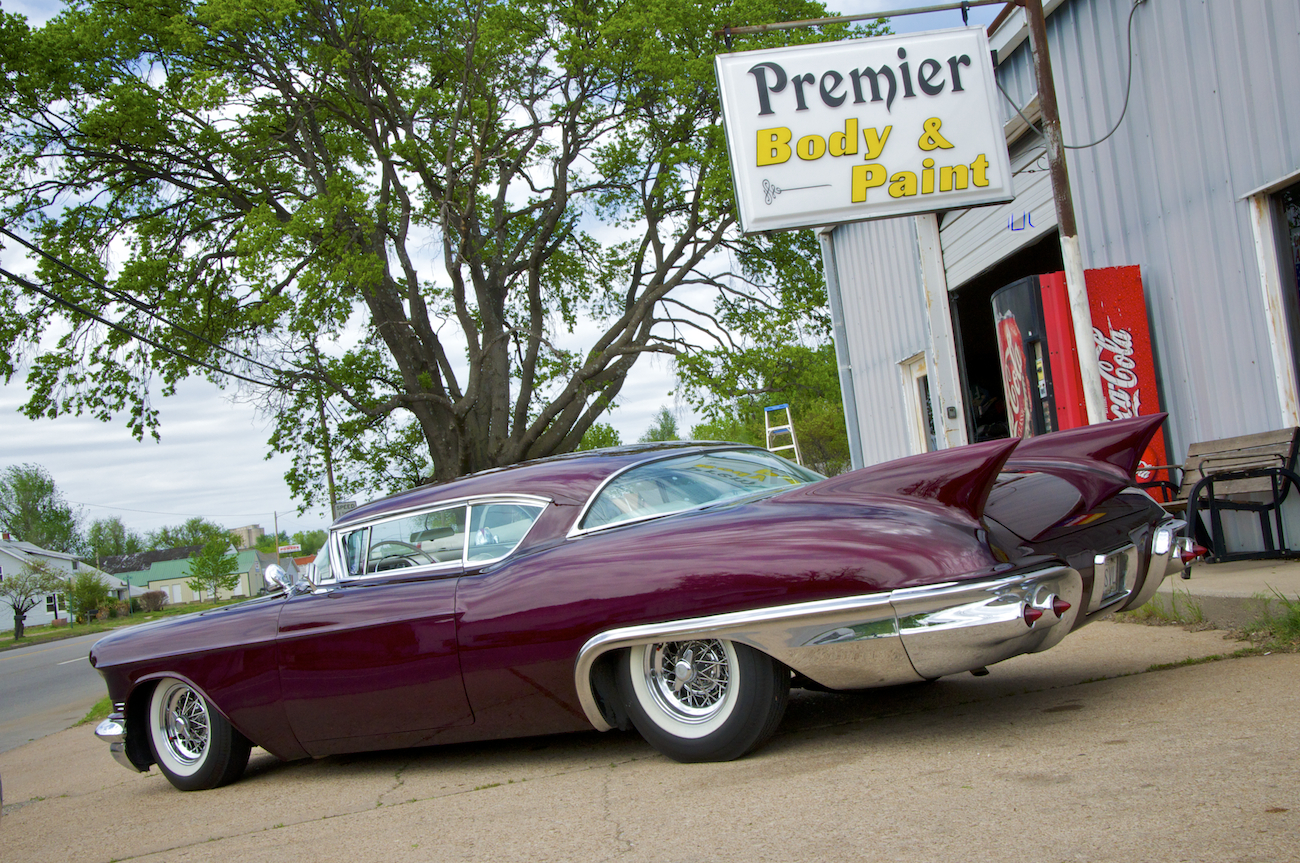 A couple of weeks ago when my weekend plans were changed due to a show being cancelled due to an impending ice storm I looked for alternate places to cover on the site. One of my favorites is my good buddy Jeff Myers’ Premier Body and Paint in Arkansas City, KS, so I decided to head down to AC and see what Jeff was up to. A couple of months ago Jeff bought out a former partner in the business and has been making some changes since then. Things are starting to look different around the shop and I see a new gleam in Jeff’s eye that’s telling me he’s got a renewed energy. I’m looking forward to seeing what Premier turns out in 2014. For those that don’t know Jeff took my car from stock to wild paint last winter, read more about that here, and it may be going back for a couple more kustom touches this winter if the timing works out:).

Jeff’s own 63 Ford Kustom hanging out in the back shop. I’m partial to 63 Galaxie’s and this one is one of my favorites. 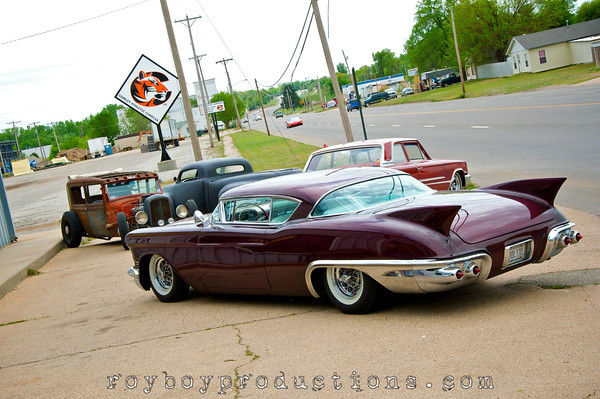 On Thursday this week I announced that I’ll be giving an award away at the 2013 KKOA Leadsled Spectacular. Included in that announcement was the initial list of sponsors that are kind enough to add to the prize pack that will accompany the award.

Award Sponsors:
RJay’s Speed Shop : 15% discount on any RJay’s built items like these. RJay’s has also been kind enough to offer 10% off of most everything else that they carry. Let’s hear a big round of applause for RJay’s being the first sponsor. Thanks brother!

Devilles Barbershop: A traditional barbershop in Wichita, KS Devilles understands that you need to look as good as your ride so they’ve offered up 2 free hair cut and shaves. A $26 value. Thanks!

Premier Body & Paint: My friend Jeff Myers of Premier Body & Paint in Arkansas City, KS has been generous to extend a 15% off to the award winner. Jeff has had a hand in some of the koolest kustoms to come out of Kansas in the last 20 years. Give Jeff a call at (620) 441-0820
Examples of Jeff’s work:

60 Fairlane that was formerly McPhail’s

Jeff’s 63 Galaxie Kustom
There are more examples of Jeff’s work and I just don’t have time to list them all. Check out Premier Body & Paint for all of your kustom body & paint work needs. He was also responsible for the new kustom paint on my own personal 63 Galaxie seen here.

Thanks Jeff for helping out the cause! 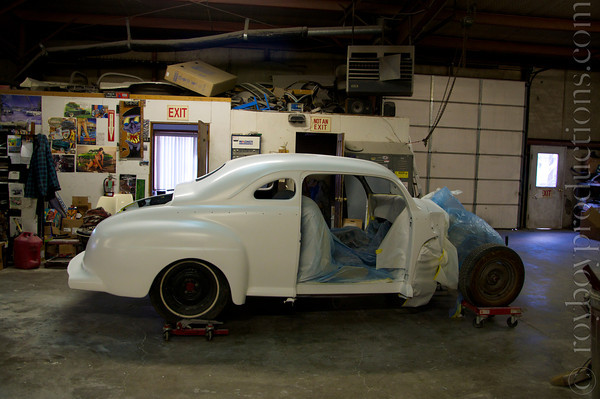 The second stop on my trip to the Texas Thaw (part 1, part 2, part 3) was at Premier Body & Paint in Arkansas City, KS the shop of Jeff Myers. Jeff’s been a buddy of mine for a couple of years, and always has something kool in the works.

For the last couple of years Jeff has been working on a 41 Ford. The car originally came in for a chop and paint job, but under some inspection Jeff found that the frame was shot, and a bunch of work was needed on the car so it became a complete frame up job. Earlier visits (here and here) to Jeff’s shows photos of the car under various states of build.

Here’s what I saw this trip. Jeff has the car primed and was prepping to paint the jambs and some other areas before pinstriper Clint Rowe came by to pull some lines on some areas that are more easily accessible now. The car will soon be off to Fat Lucky’s to get an interior done before coming back to Premier for final paint and assembly. Jason’s Merc is in house for some new kustom work, new bumpers and some other mods if I remember right.

The 60 Fairlane that McPhail did was in the back, waiting to have the damage of a bus sideswipe repaired. The new owner in NJ had the unfortunate incident and sent the car back to Jeff to get it fixed.

The majority of the metal work is roughed in now. That’s it for this stop at Premier Body & Paint. If you need kustom work done, go to Jeff, he’s the one that did the paint on my Galaxie this winter. 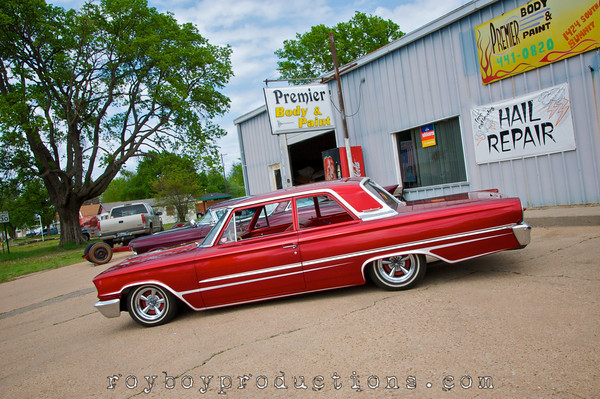 I’ve been blessed to meet some great folks in my travels around the midwest attending car shows from Austin to Chicago. So about a year back I decided that I wanted to feature some of the great people and their vehicles in a way that photographs alone couldn’t do. So in August the first video was released of Yblock292’s 29 Roadster. A bit behind schedule here is the 2nd video, this time of Finkd (Jeff Myers) beautiful mild custom 63 Ford Galaxie.

Jeff has become a great friend and was nice enough to take me and the camera for a ride to explain all about the car. I hope you enjoy it!

Jeff’s Arkansas City, KS based shop Premier Body & Paint is a H.A.M.B. Alliance Vendor so if you need some work done, make sure to join and let him know you’re a member! Music in this one was provided by my buddies The Rumblejetts, make sure to support them as well.