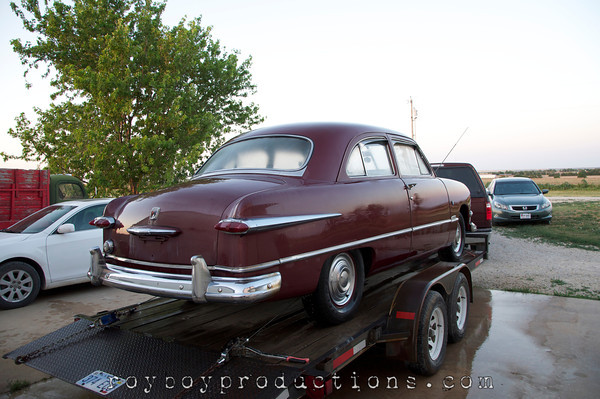 In the week since the last post about my 51 I’ve driven the 63 Galaxie 13 hours round trip to Springfield, MO for the Queen City Riot and I’ve done a small amount of work on the 51. To see more about the Queen City Riot show coverage see the gallery here or the blog posts Part 1 | Part 2 | Part 3 | Part 4

All that I got done on the 51 this week was installing a new fuel pump and verifying that it was in fact working. Installing the pump shouldn’t have taken nearly as long as I took, but it’s on now. Just a hint, if the engine is still in the car, it’s easier to take off the pump and the housing that it’s attached to than to remove the pump from that housing, unless you have a special 1/2″ shorty wrench or super thin walled sockets. So after some cursing, some head scratching and using an old Cragar S/S wheel with tire as a platform to stand on, I got the pumps swapped out.

Next step was to get the pump plumbed. Dammit. On both the inlet and outlet the new pump had larger connectors than the existing lines that the car had. A trip to Salina (20 miles each way) and 3 different stores (the 2 auto parts stores didn’t have them) and I came up with a set of new hose barbs and some new hoses. I replaced the existing rubber lines with the new hoses, primed the carb, hooked up the battery and turned the key.

She sputtered for a second or two, ran out of the gas in the carb and died. The fuel bowl was still empty on the fued pump too. So I cranked it a few times to see if the pump was able to draw any fuel up from the tank. Bone dry. After a few more attempts the battery was dieing and I was tired anyways so I called it a night. The plan for the next day would be to charge the battery, and see if the fuel pump could pull gas out of a water bottle directly next to it.

The next day I ran out to my Dad’s to borrow a gas can, the 5 mile trip was better than the 20 miles to town, and to pick up my battery charger that he’d bought for me years ago. Since I’ve recently decided to actually start working on my cars in my garage it would be good to have it home. I hooked up the battery charger and went into the house for some lunch. Upon my return I filled the water bottle with gas and stuck the fuel pump feed hose into it and tried the ignition again. Again the car only sputtered for a few seconds but I could see the fuel pump was pulling gas out of the bottle. Yay! that means that the pushrod between the cam and fuel pump might work.

Next up will be to see if I can get the car to run on that bottle of gas in the engine compartment. If so, then I need to replace the soft line at the fuel tank and try to use the air compressor to blow air through the hard line to make sure it’s not clogged shut. After that I’ll reconnect my new soft fuel lines at the tank and lightly use the compressor to put air into the tank to try to force the fuel up the line towards the pump. If the engine is capable of running and that line is full of fuel, we might be able to get her to move under her own power.

The tank is visibly newer than the straps that hold it into the car but I still will snake a camera down the filler pipe to see what the inside of the tank looks like. If need be I have a tank sealer kit waiting standby.

So, that’s where it stands for now, I hope to report next week that she is moving under her own power, see you at a show,