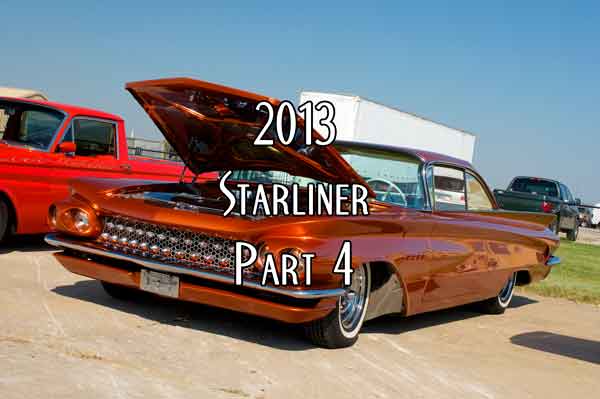 For Part 4 we’re still at the show, and we start with Aaron of Fast A.L.’s Upholstery’s Ford and Mickey’s  (StrayKatKustoms’) 60 Chevrolet flattop with 60 Merc Grille and Pontiac taillights.

Joe brought this beauty out for us all to drool over.

I caught Jack unloading some chairs out of the trunk of his new 51 Ford. Body, Paint and a bunch more stuff by Chaotic Customs.

It still rocks a straight 6 but Steve’s 58 Ford moves on down the road and looks good doing it.

All the way from Omaha, NE to Wichita to hang with us. Thanks for coming down!

If you don’t know Gears and Gals Magazine, you need to go to their site and order an issue. You should then buy a subscription.

Good to see you again my friend, 2 weeks in a row even!

Joe’s Caddy is a ton of fun, maybe 2 tons looking at her…

Don’s Buick is probably one of the finest anywhere.

Some of my favorite Kansas City area folks.

Jeff and Verna brought this killer Plymouth hot rod up from Texas. I am planning on shooting this car this fall. If no magazines bite on the article, I’ll post it here for all of you to see.

One of the koolest places ever to hold a car show, even though this year it was quite hot.

I’ve seen this truck in Austin and a bunch of other places, I dig it every time.

Normally not my style but the nose art on the truck matches in with the location.

The McGregors, an American Car Family.

Hub and Gloria’s “Cinnamon” is my favorite kustom ever. It’s been together since the late 80’s. It’s been in magazines before but would you like to see a full feature on it here?

U.S. Mule even came out to play.

Roy brought out this beautiful shoebox. The flathead is one of the cleanest ever.