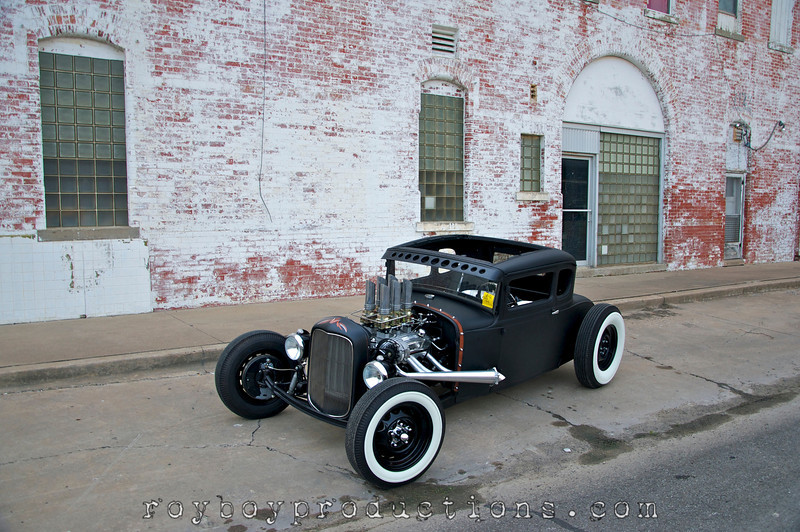 A long time tri-five fan, Rick Salyer enjoyed driving his gorgeous black 1957 Chevy to some shows with his fellow Tulsa, Ok area friend Robert Roggendorff. In a “it’s a small world” twist Roggendorff was a high school buddy with my Dad and his older brother Tom, and after a surprise party reunited Roggendorff with the Scanlans we started going to shows together. The KKOA Leadsled Spectacular, the H.A.M.B. Drags and the Greaserama were all shows that we’ve attended as a big group for a few years.

These events showcased a few other styles of cars and before you knew it, Salyer found himself eyeing a 32 Ford in the parking lot of the hotel over H.A.M.B. Drags weekend. Soon he was starting to look for a suitable project. Having never attempted a project like this Salyer figured “if you think you can, then you can” and started gathering parts for his new ride.

“It turned into the most satisfying things I’ve ever done. To think about it, to find it, to build and build it with my 89 year old father (I’m 68) and finish it and be recognized for it. It just doesn’t get any better than that,” Salyer explains of the build.

Salyer and his retired father Bill Salyer started with a 4” chopped 31 5 window body that had been just hanging out behind Sand Springs, OK shop Hot Rod Garage who had done some work on the previously mentioned 57 Chevy. The project took about 15 months over all, the elder Salyer was a retired metal fabricator with some experience customizing cars in his 30’s, both of which “were beneficial” in the build process. With about 3 months to go before the 2012 Stray Kat 500 Roggendorff issued a challenge to finish the car and debut it at the 500 in nearby Dewey, OK.

Salyer describes that 3 month push as, “I would work a half day, then go pick him up (Bill cant see to drive well anymore) then work most days until 9 at night, I would then take him home and do it all again the next day.” There were lots of loose ends to tie together but they kept at it and at 7pm the night before the car was to leave for the 500. The car performed well on it’s initial 90 mile trek, averaging 16mpg and being a lot of fun to drive.

The frame was custom built for the project with a 36 Ford dropped axle up front and the original 57 Chevy rear end suspended above the frame in the rear for the stance that Salyer wanted. More of the original parts of the 57 made their way into the 31 along the way. The 57’s 283 mill was rebuilt by Bill Wagnor after being bored to 302 cubic inches and fitted with a 6 Deuce Offenhauser intake, MSD ignition and some Gear Drive Speed & Custom headers. The newly freshened engine was backed up by a Gearstar 350 trans and the aforementioned 57 Chevy rear end. The 31’s whoa power comes from the stock 57 Chevy rear drums and 40 Lincoln front brakes. Rollers are steel artillery wheels with Firestone hides all around.

In addition to the chopped 5 window body the car has a chopped 32 Ford girl housing, Guide 62-C headlights, 39 Ford tail lights and owner made custom leather accents with bullets. Salyer laid down the flat black paint and Shane Z pulled the lines at that first Stray Kat 500 in 2012.

The interior is utilitarian, this is a hot rod not a luxury ride after all. Hunts custom aluminum bomber seats provide a great visual offset from the flat black body. A Grant steering wheel sits atop a custom steering column.

That first weekend at the 2012 Stray Kat 500 the car won Ben Dragdaddy’s “Coolest Pick” award and then the Suede And Chrome pick at the Kansas City Good Guys later in the summer. Salyer was “overwhelmed” that he and his father’s efforts were recognized with the accolades. “I have a great respect for the guys in this hobby and the cars they love because I now know the hard work. The satisfaction they feel twistin bolts and getting dirty and creating their own personal portrait masterpiece.”