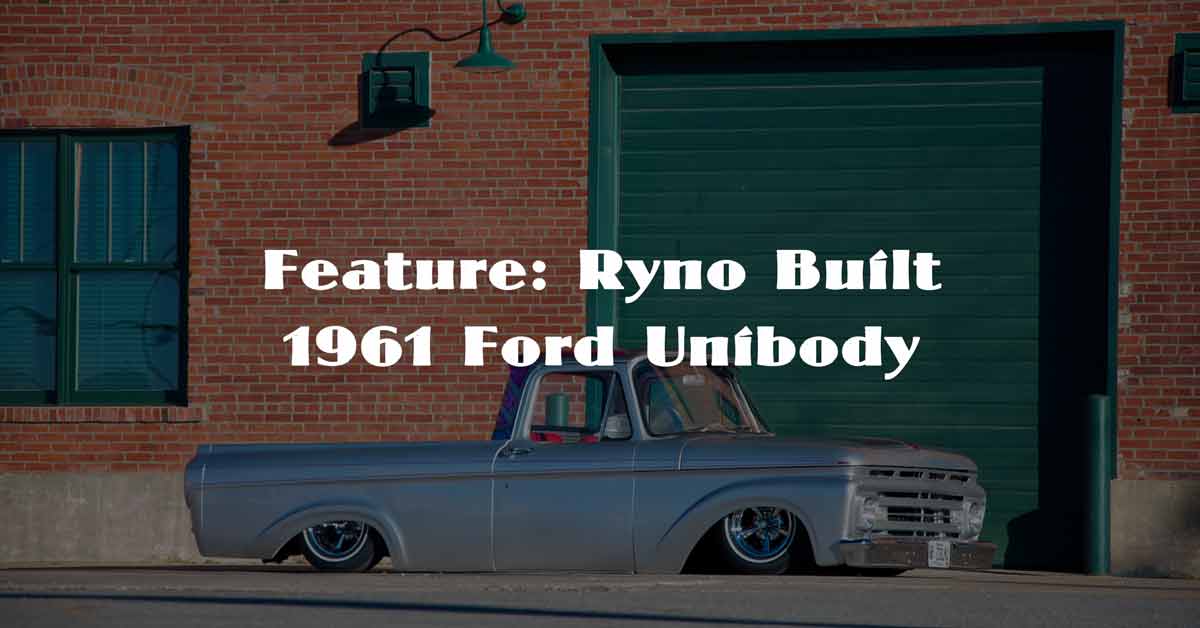 We’ve all seen it, we’ve all done it. NO not that, I’m talking about people who buy a vehicle with one plan in mind and then it turns into something else. That’s exactly what happened to the simple shop truck build by Ryno Built of SW Missouri. 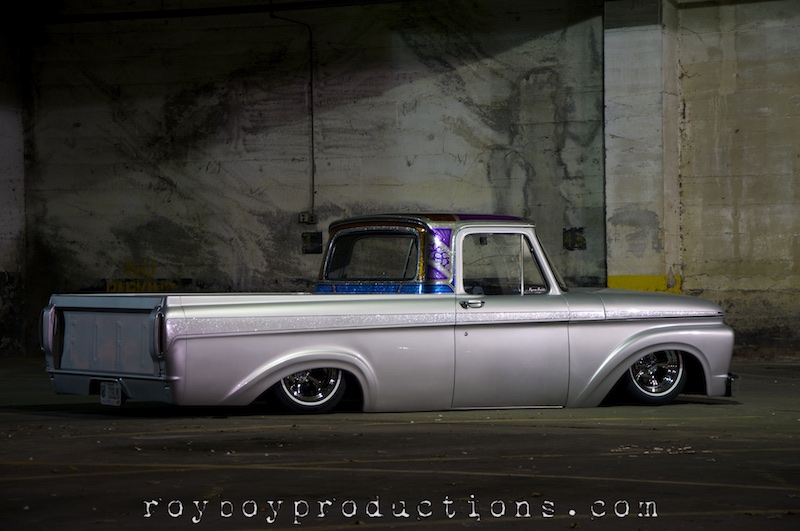 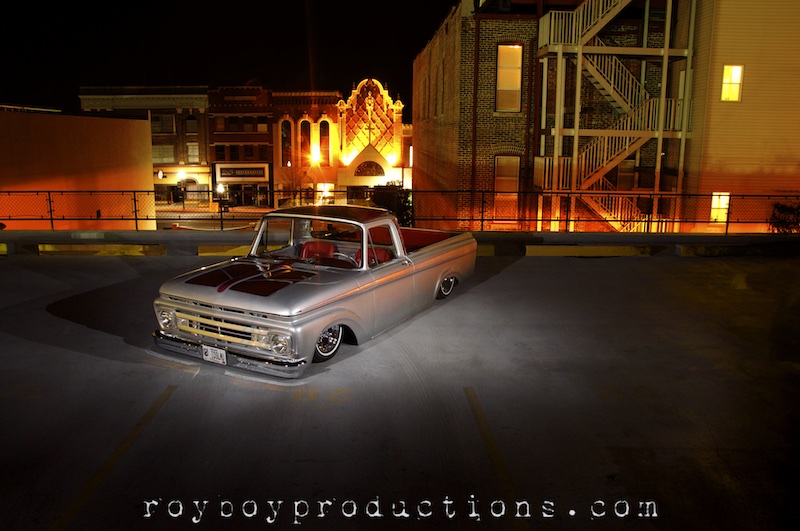 Early in the build Ryno (Ryan Lieberman) said “once again I got myself into a project that I really didn’t want or need.” He’d been thinking about doing a simple shop truck, something fine for bombing down to the parts store or lunch while still dirty from building a kustom car, hot rod or whatever else is in the shop. That plan started to come to fruition while surfing some forums and coming across a 1961 Unibody Ford Pickup that his buddy Chadillac had for sale after saving it from the crusher. 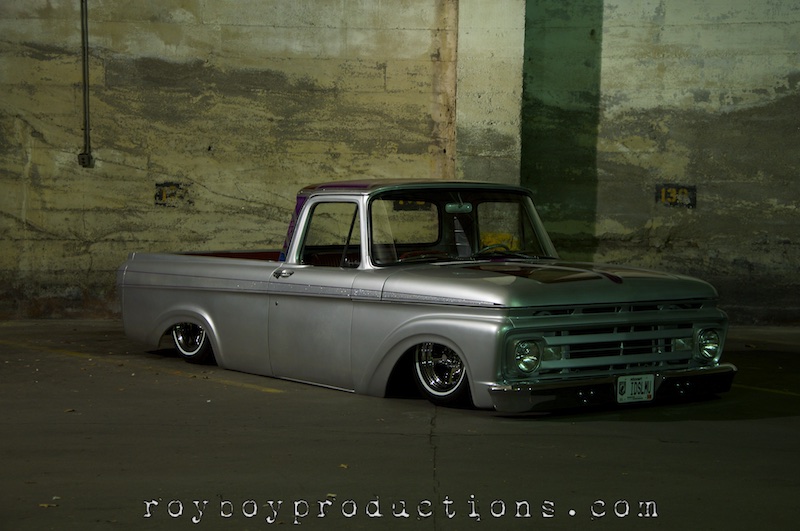 The next step for Ryno was doing a little online research to see how difficult it would be to make the truck sit the way he wanted, although it wasn’t as easy as he’d hoped somewhere in the process his mind was made up. The truck would be bought and brought to Ryno built to go under the knife. After 5 hours of pressure washing the inside and underside of the truck it became apparent that rust was going to make this project more difficult than originally planned. The floors needed attention, as well as the toe boards, cab braces, etc. All of it fixable, just adding to the workload. 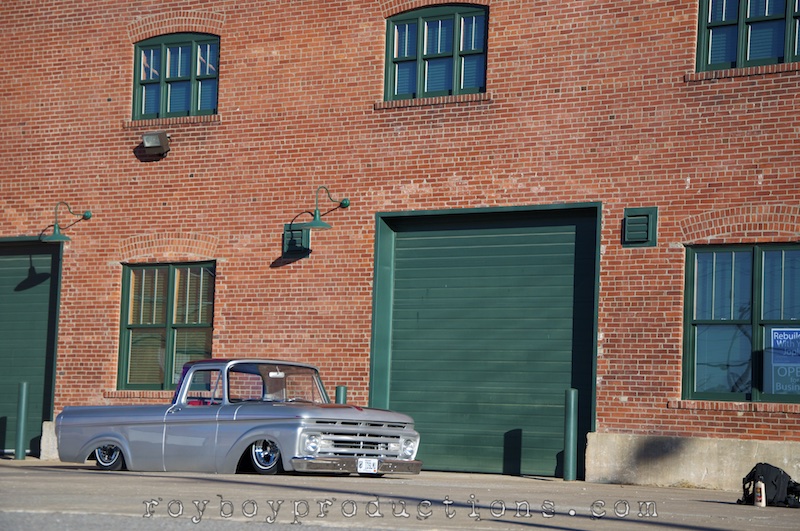 The first step was getting the suspension down to a reasonable height and to improve handling and drivability. The tried and true JW Rod Garage Mustang II with a power rack and 2600 lb. air bags were sourced and installed with a 3” Z in the front. In the rear an 8” c notch was constructed, 2600 lb. bags were installed and a custom 2 link with pan hard bar was fabbed up. The Mustang II and the rear end were both moved to make the wheels center up in the wheel wells better during this process as well. 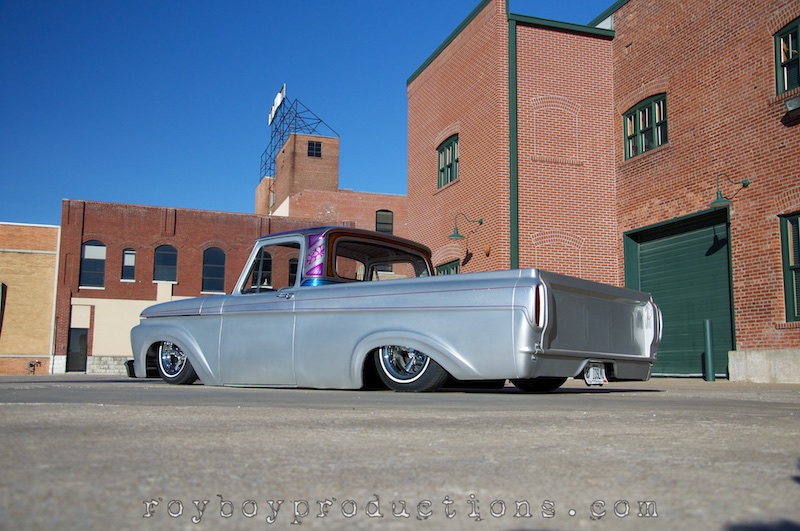 To make room for the notch and to keep the bed flat for hauling stuff, remember this is a shop truck, the bed floor was raised. Under the raised bed is where a 65 Mustang gas tank resides now that the original filler neck was shaved off the body, but more on the Mustang in a minute.  The rest of the frame was boxed, new x-members were made along with drive shaft hoops. The cab floor was relieved for a new drive shaft’s clearance when the truck is laid out. 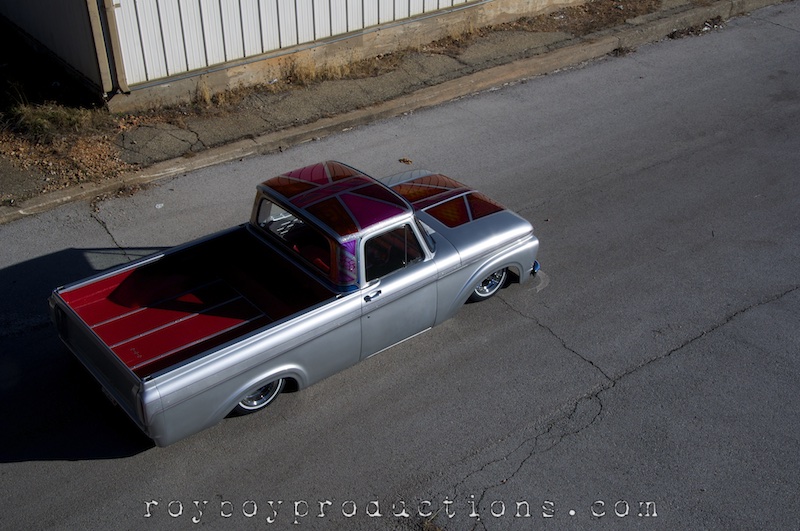 At the front of the bed is an enclosure for the battery, air compressor, and tank. After that was all fabbed and in place Line-X in Springfield, MO applied a bright red Line-X liner to add protection and durability to the inside of the bed. The raised section of the bed floor is accented by 4 brushed aluminum strips to break up the floor from being too smooth, add a little flair and give the stainless steel bolts to reside that hold the top panel on. 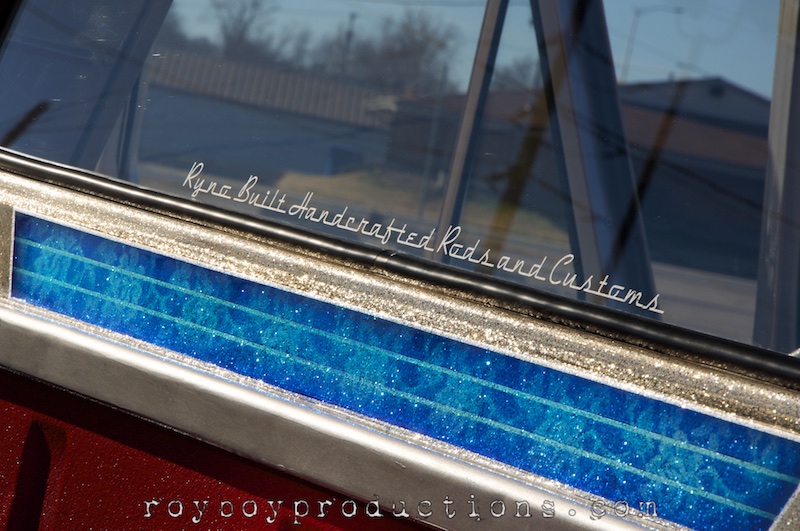 The truck’s drivetrain and a few other components had already been figured out as Ryno Built was mid-build on a 65 Mustang Shelby GT350 that had suffered some damage in the devastating tornado that ravaged nearby Joplin earlier that year. The Shelby was pretty hammered so the owner decided to go all out, turning it into a road race monster with a wide body kit and tires that would make a Corvette get Goodyear Envy. The Unibody pickup benefitted by gaining the Shelby’s hot 289 and transmission, along with seats and the previously mentioned gas tank. 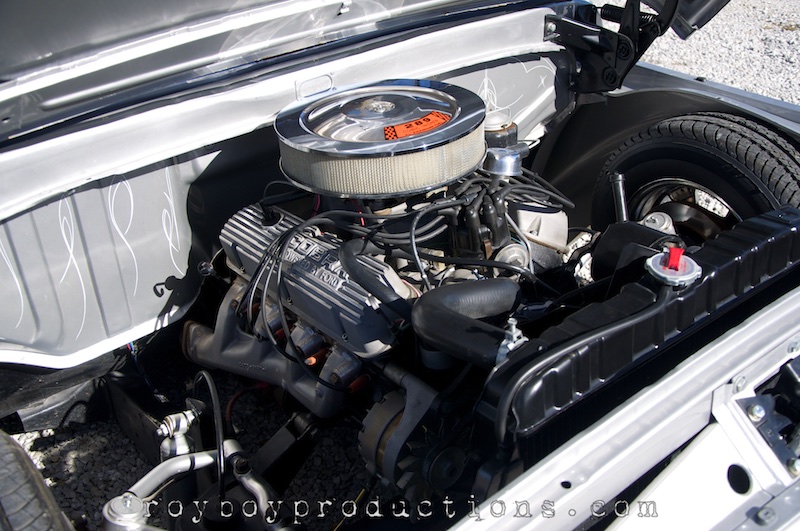 The Hi-Pro 289 is fairly built, .30 over, balanced, fitted with the proper Cobra valve covers, rare headers, & intake. The exhaust duties are handled by a pair of glass packs and the shifting duties are handled by the GT350’s Cruise-o-matic transmission. Stopping power for the Unibody is handled by a 1” bore Corvette style generic master cylinder with a single 7” booster followed by a Wilwood proportioning valve. A Rebel Wire 9+3 panel and harness were meticulously installed to replace the aged and worn out wiring. 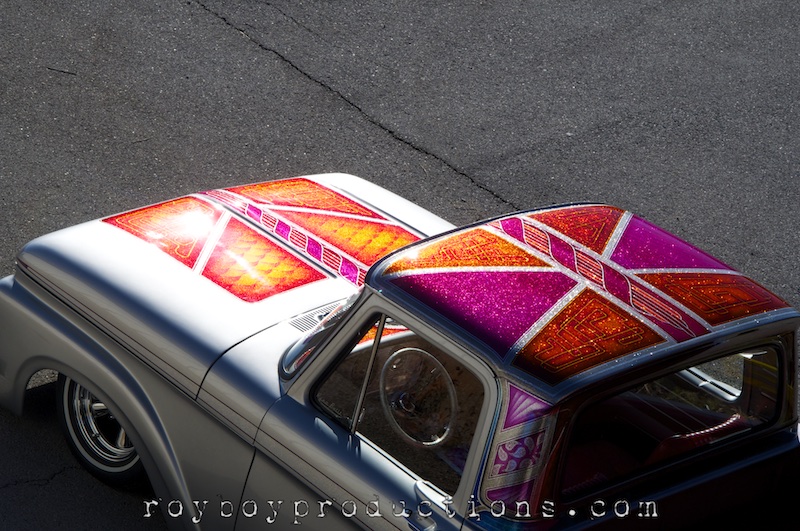 The majority of the build to this point was done in about 3 weeks. Then for a shakedown drive with no hood, no side glass and a without a few other refinements, the truck was driven about 1000 miles round trip to the Hunnert Car Pileup in Decatur, IL. Other than tossing a center cap of the Cragars that were on the truck at the time, the trip went without a hitch and the truck averaged 12 mpg at interstate speed thanks to a 3.25 rear gear. 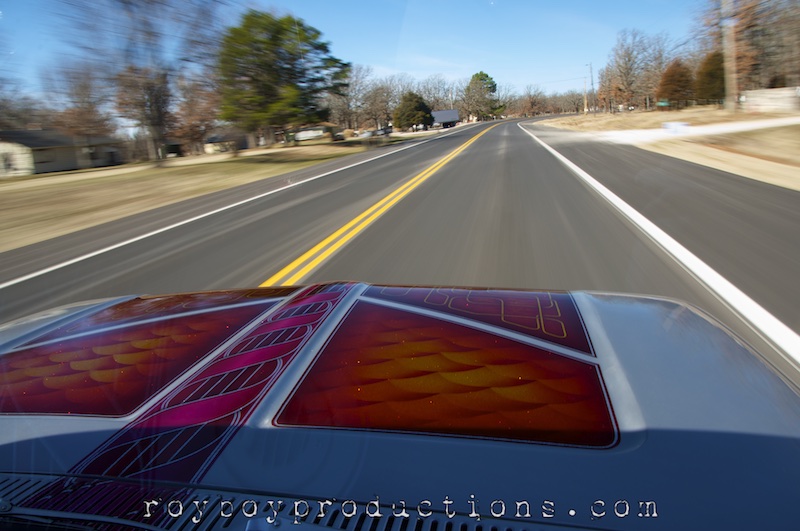 At this point the truck was primed, and had a flaked roof. A pinstripe artist named Cheddar had also stopped into the shop to pull some lines in the interior and under the hood. The truck was driven like this for awhile while Ryno focused on customer cars at the shop until it was time to finish the truck. 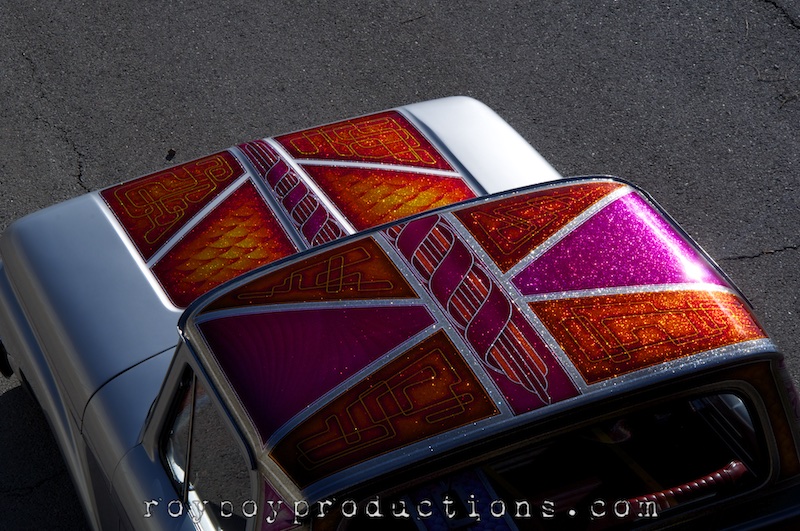 The Cragars were ditched and a new set of TrueSpoke Supremes were mounted up 14×6 with 185 rubber in the front and 14×7 with 195 in the back with thin white walls all around give the truck that just right look. The truck’s emblems were shaved and the body was worked until smooth in preparation for paint. Picking December to do the wet sanding may not have been his favorite idea of the project but it had to be done to get the paint smooth. Ryno and B Street Paint Works in Joplin, MO worked together on the custom panel paint on the truck. 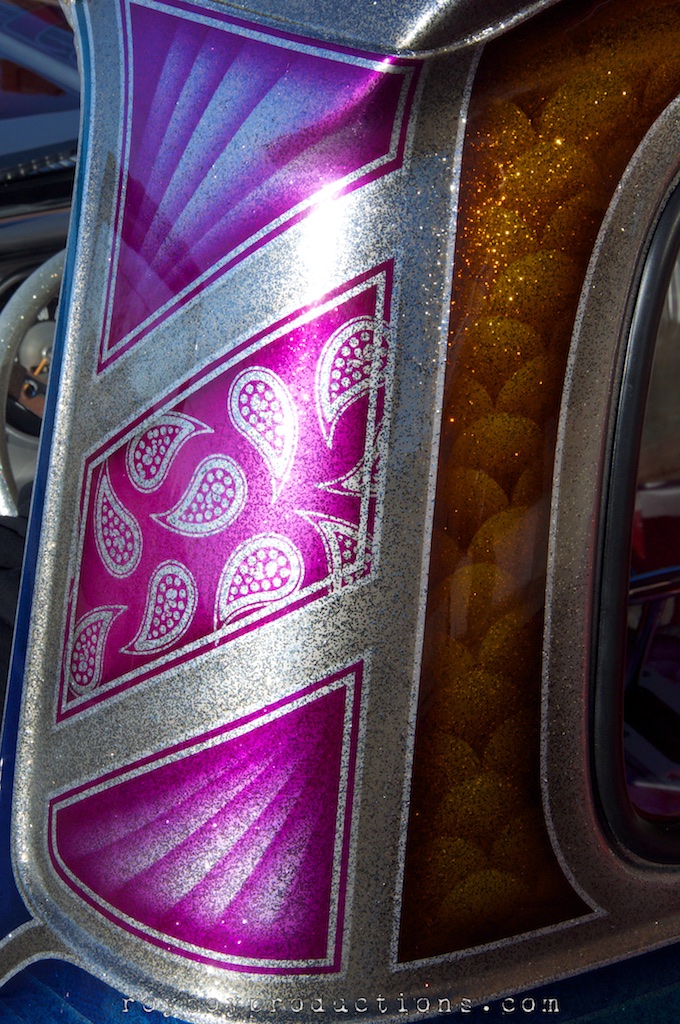 Panel paint was added over 3 different sizes of flake with a nod to the wild lowrider paint jobs of the 70’s. Endless lines, a ribbon running from the front of the hood over the dash and roof, lace work, scales, shells, fades, and bandana styles were all used to make the truck explode in color and old school kool. GM Silver Sheen is the base color while House Of Kolor Pearls and Candies make up the panels. Ryno would like to thank Jason and Ramon at B Street Paint Works for all of their help laying out the intense panel job. 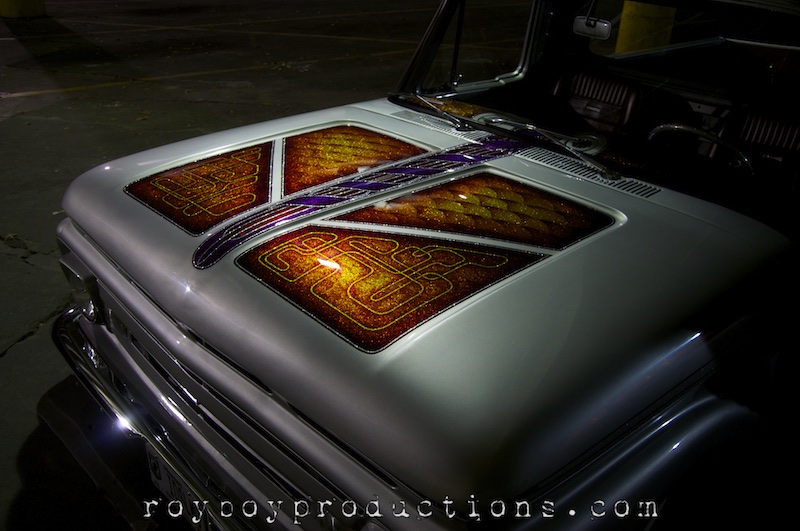 The interior of the truck now sports the seats from the Shelby, along with an Ididit column topped by a flaked Mooneyes steering wheel. The kustom paint makes it’s way onto the dash and custom build center console. The factory dash has been updated with some new AutoMeter gauges and the console houses the air switches, some cup holders that Ford forgot in 1961 and a Kenwood DVD unit. Custom fiberglass kick panels hold the front speakers while a custom subwoofer enclosure hides out behind the seats. More candied and flaked panel paint is now on the removable door panels on the inside as well. 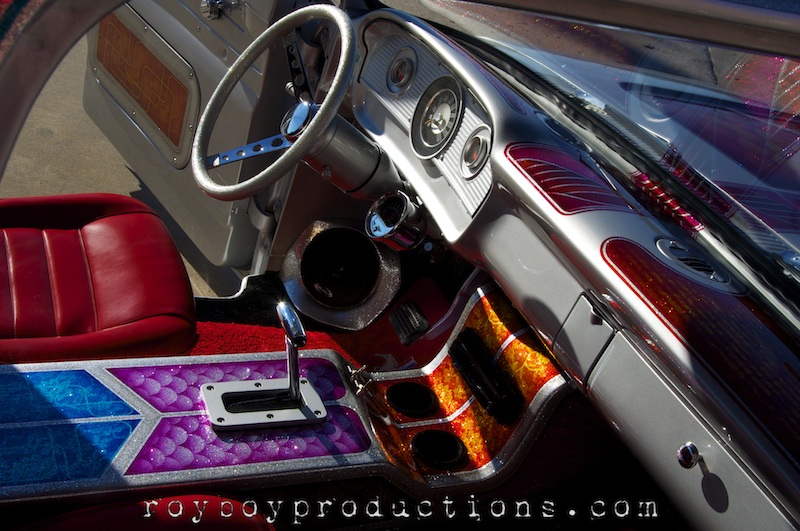 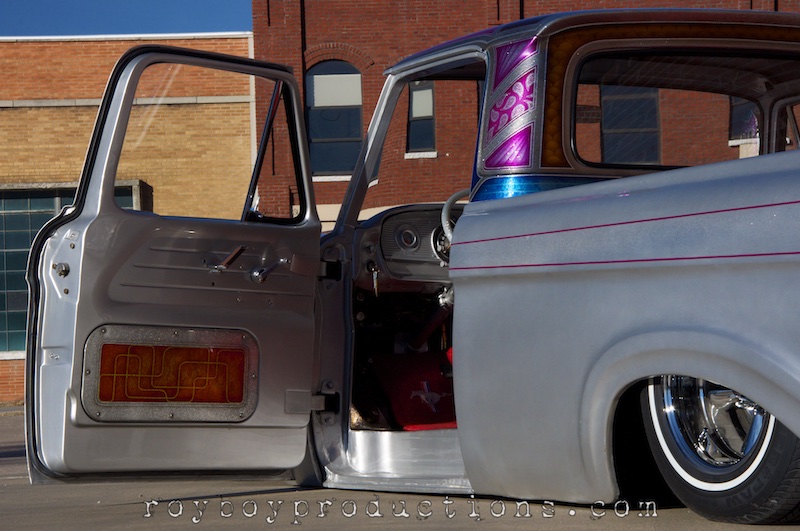 When asked what happened to the simple shop truck idea Ryno simply responded “it evolved.” That it did. From experience I can attest that this truck is a driver, it is a shop truck and is still used to haul supplies for the shop and go grab a bite to eat. The function of shop truck was not lost when the build went into the land of full on custom. “If I’m going to have a shop truck, it’s going to look cool” says Ryno, to that end, job well done. 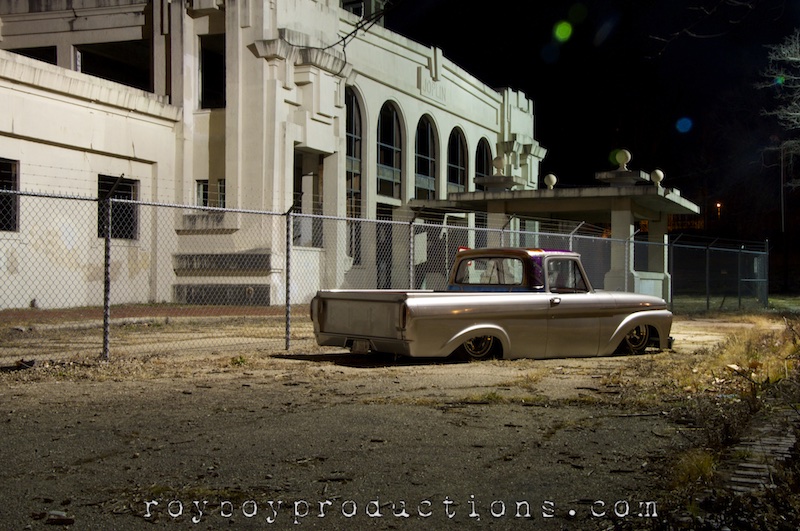