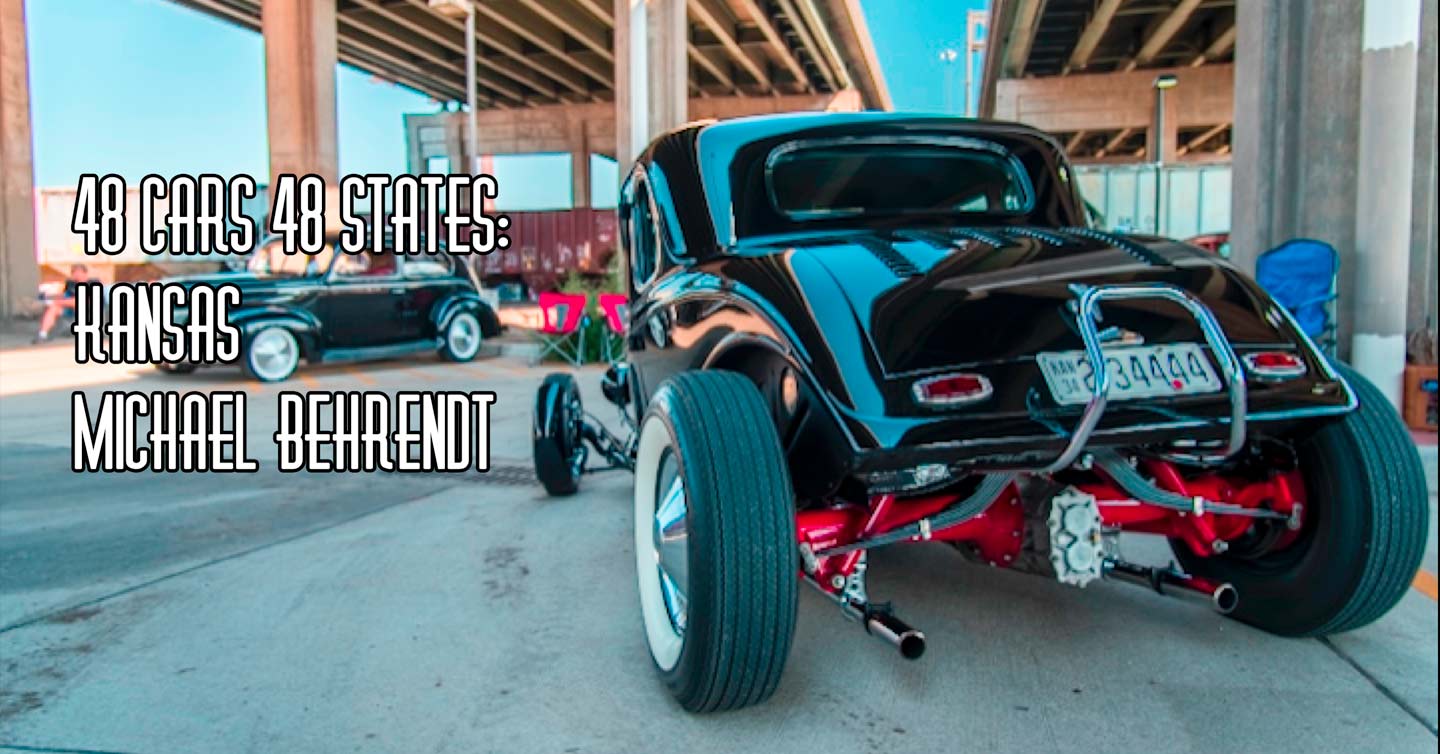 Picking up where yesterday’s post left off, I was at home Wednesday night so I took advantage of the opportunity to do some laundry and use my own fast wifi. Thursday morning I got a ride back over to pick up the Galaxie, packed my stuff back in my car and headed for Wichita. I knew that I needed to fix the exhaust leak on the passenger side so I called up Rocky Burris and headed to his place figuring that it would be easier to get a set of gaskets for a Ford FE in Wichita than in Salina. Plus if I had to order them in at least I’d be in Wichita with everyone for the Starliner weekend instead of sitting in my house twiddling my thumbs.

After getting to Rocky’s and letting the car cool down a bit I pulled the exhaust manifold loose from the engine, sure enough it was blown out. Rocky called a local shop and we sat and BS’d until we got the call that they had it delivered from another store. A couple of hours after getting to Wichita I was back in business.

The Lonely Knights were rolling in to Wichita in groups and the first group was in town so I headed to the Starliner host hotel to meet up with my friends and then went to our favorite place to grab a big dinner for 20 people. Then it was over to Corey Conyers’ Crown Custom shop to check out a couple of dragsters he’s working on. Finally we headed back to the host hotel, poured a couple of red solo cup mixed drinks and enjoyed hanging out in the parking lot. A dang good day.

Friday morning of the Starliner weekend is always the start of the Garage Krawl, I knew that I had a car to shoot at some point during the day so I just hit one stop, my buddy Jack’s place outside of Derby, KS a couple of miles away. Here are some shots from his place. 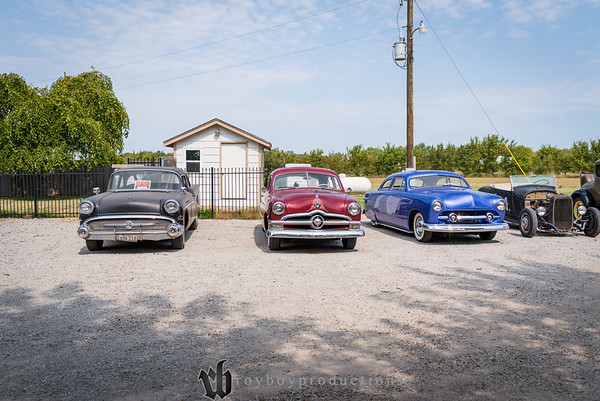 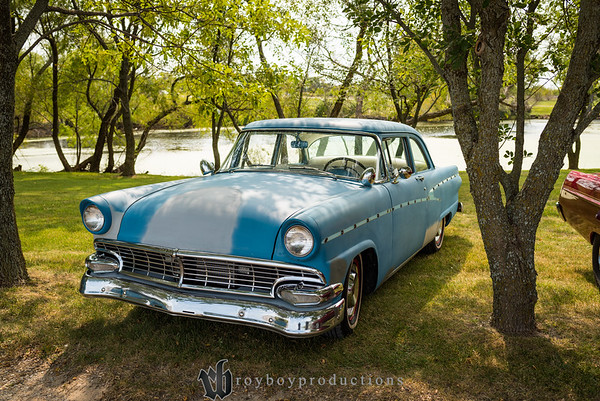 After that I went up to my friend Michael Behrendt’s place in Wichita. Back on episodes 80/81 of Chrome Pipes & Pinstripes he was part of a group of the Wichita Fundamentals club in a giant group interview. Click here to go listen to those.

One of the cars in his collection is a 50 Mercury that was once his grandfather’s and has been in Mike’s care for about 50 years. 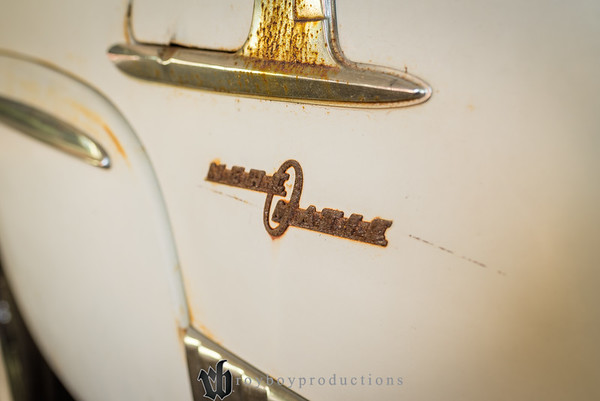 That’s all of that car for now, maybe later I’ll go back and shoot some more.

The car of the day is Mike’s 34 5 Window. Inspired by a model that he built and customized as a kid plus taking some styling cues from Grabowski’s Kookie Kar’s stair step profile, the car has a fun history. Recently he found photos that show a 5 window 34 body with holes in the body and a cut back in the firewall just like this car had when Mike got the body, these photos are from the 60’s and show the car as a gasser, they appear below. 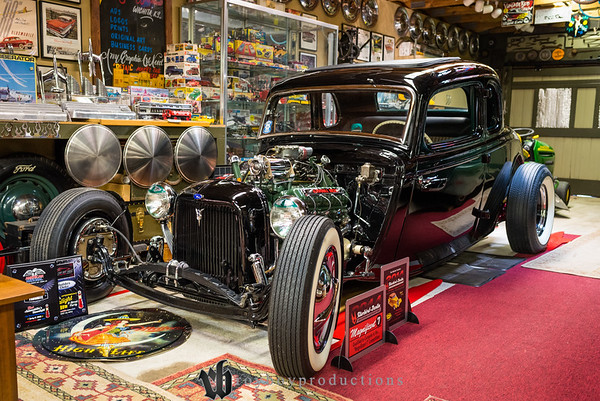 Another influence on most of us from the Kansas area and folks around the world was Dave Stuckey, Stuckey recently passed away unfortunately, but we were lucky to have him while we did. In Mike’s shop is an issue of Car Craft with Stuckey’s Lil Coffin before it became the iconic show car with the cantilevered roof. My personal favorite version of the car.

The body came to Mike’s collection after asking a neighbor for years if it was for sale. Finally the neighbor said that he could have it, for the cost of a ride someday when the car is finished. Sounds like a great deal to me. Oldsmobiles have a special place in Mike’s heart so he had the perfect mill for the project. In fact there’s nothing on the car newer than 50 except for the 59 steering wheel. This car is full of vintage goodness from Mike’s collection. More photos of the car below, for the full story, you’re gonna have to get the 48 Cars 48 States book, or listen to episode 171 of Chrome Pipes & Pinstripes. 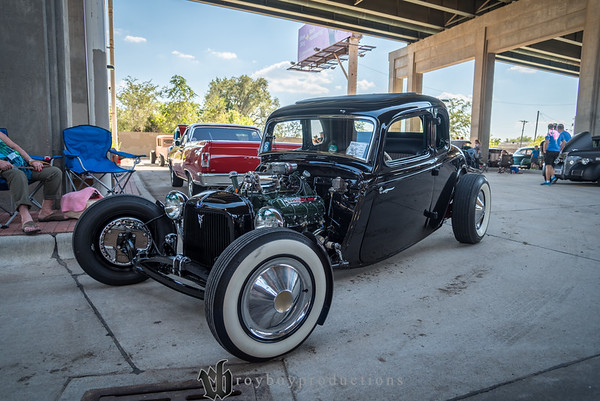